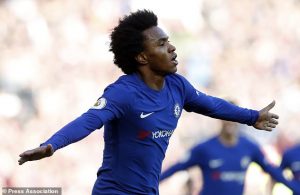 BARCELONA have made another huge bid in their pursuit of Chelsea star Willian… offering £65million plus add-ons for the Brazil star.

The La Liga giants have been on the prowl for Willian all summer, with another non-EU spot available after Philippe Coutinho qualified for a Portuguese passport.

Having already failed with two early bids,  Barcelona were rumoured to have offered £55m  on Friday.

But that sum has already been increased by £10m-plus with Manchester United reentering the race and sparking a bidding war.

Willian grew disillusioned at  Chelsea  under Antonio Conte last year and is yet to be tempted into staying in London under new management.

Maurizio Sarri is very keen to see  Willian  stay at Stamford Bridge as they aim to break back into the Champions League.

PA:EMPICS SPORT
3 Willian is the subject of a £65m plus add-ons bid from Barcelona

However, the winger seems increasingly keen on a move to La Liga.

With Eden Hazard and Thibaut Courtois also thought to be pushing for a move, it presents Sarri with the potential of losing three of the key men.

The ex-Napoli boss  yesterday urged the unsettled players to give him a chance  to prove himself by spending a week training with him to see for themselves how they could flourish under him.

Yet that is likely to fall on deaf ears with Willian, with the prospect of  potential moves to Barcelona  or Manchester United being dangled in front of him.

Fifa Women's World Cup: Nigeria lose 1-0 to France, may still qualify as one of the 'best losers' '