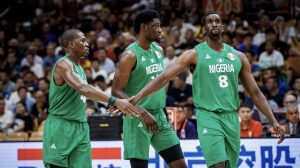 GUANGZHOU, Sept. 8 (Xinhua) — Fights for the carrot of Olympic qualification ruled Sunday night. China lost a blockbuster game 86-73 to Nigeria in qualification round of Group M, seeing Iran progress into 2020 Tokyo Olympics after it thrashed the Philippines 95-75 in Group N in 2019 FIBA Basketball World Cup.

Before the clash, China and Nigeria each had won two games, which made them in pole position for direct Olympics entry in their respective regions of Asia and Africa.

Fang Shuo pocketed five straight points for China after tipoff. The 29-year-old scored 11 points in the first quarter to give China a 21-19 lead, but Nigerians’ solid defense in the second period forced China into fouls and turnovers. The hosts found themselves trailing 35-31 as the first half ended.

Yi Jianlian scored a straight five points to cut the deficit to only one for China, but Nigeria’s Ekpe Udoh answered with 11 points through jump-shots and layups.

Nigeria led 60-51 into the fourth quarter, which started with Zhou Qi’s fifth personal foul. Yi Jianlian stood out again to close the gap to only three at 62-59 with seven minutes to go. Fang Shuo and Abudushalamu even shot two consecutive three pointers in the last three minutes. But those morale boosters came so late that nothing could stop Nigeria to kill the game.

Yi Jianlian put up a game-high 27 points, followed by 19 points from Fang Shuo and Negeria’s Josh Okogie each. Yi and Fang were the only two Chinese players that scored over ten points.

The victory over China ensured Nigeria a berth in Tokyo by the higher game points difference of all games despite its African rival Tunisia edged out Angola 86-84 in a Group N thriller.

Mohamed Hadidane from Tunisia made only one shot during the whole game and saved his team by this 3-pointer which gave Tunisia an 86-82 lead six seconds before the final whistle. Gerson Domingos’s floating jump shot made at the buzzer couldn’t help Angola rewrite the result.

Tunisia entered the second quarter with an 11-point lead and extend it to 52-37 before the interval. Makram Ben Romdhane’s two 3-pointers help to engine a 10-2 spurt. The team’s second scorer only missed one shot from his five attempts from downtown.

Angola stormed a 10-0 run right after the second half kicked off and even claimed its first lead of the game 72-71 with seven minutes to go in the last quarter. Tunisia regained the lead and held on the rest of the way, but a 2-point margin wasn’t enough to qualify for the Olympics.

Iran’s overwhelming victory over the Philippines wasn’t enough either to rise above Angola in Group N, but is was more than enough to book a spot in Tokyo after China lost to Nigeria by 13 points.

The Iranians dictated the pace from the first quarter right to the end. They built a 14-point lead at halftime and led by as many as 25 by the end of the third quarter. Hamed Haddadi led Iran with game highs in points (19) and rebounds (7). Four other Iranian players score double digits.

Second round of Group Phase featured battles to top groups. Serbia swallowed its first defeat in the tournament as Spain slowed it down with tough defense in an 81-69 win in Group J, while Argentina secured its first place in Group I after trouncing Poland 91-65.