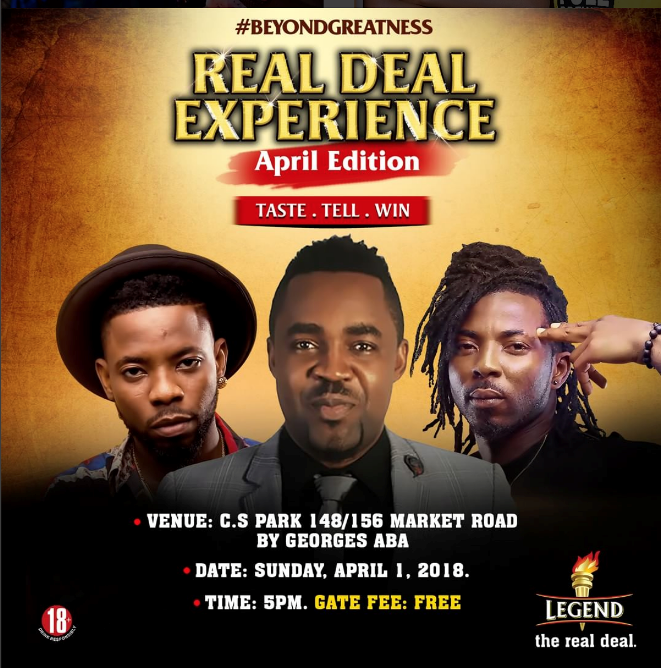 Therea��s just something electrifying about shows. Whether ita��s the performances, the energy from the crowd or just the atmosphere, they offer one of the most exhilarating experiences one can imagine.

Legend Extra Stout understands this all too well and has continued their rich tradition of bringing stunning performances to local audiences. Aba is next up, as Real Deal Experience tour makes a stop in a�?Goda��s Own Statea�?, Abia.

This April edition will feature former Big brother Naija housemate, Ifu Ennada as co-host and audiences can expect to be treated to thrilling performances from some of Nigeriaa��s music hotshots including Nigga Raw, Ruff Coin, and other exciting entertainers like popular comedian De Don and other local acts.

This year, fans will have even more to look forward to, as Legend Real Deal Experience will now be on Easter Sunday.

The show, which is arguably Nigeriaa��s biggest consumer activation event has previously held in cities including Lagos, Ibadan, Onitsha, Umuahia, Abuja, Port Harcourt, Abakaliki, and Owerri, has featured some of Nigeriaa��s biggest entertainers including MI, Timaya, 9ice, Kcee, Oritsefemi and Small Doctor among others.

If you are in Aba, make it a date on Sunday 1st of April at C.S PARK 148/156 Market Road by Georges Aba to enjoy awesome performances from some of Nigeriaa��s very best.

168 thoughts on “BBNaijaa��s Ifu Ennada, Mr. Raw And Others To Take Real Deal Experience in Aba This Easter Sunday”