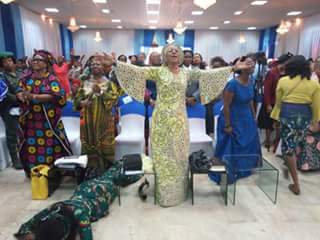 Wife of the Delta State governor, Dame Edith Okowa has charged mothers to possess broken spirits in order to be able to raise their children in Godly way, stressing that people go to church and return the same a�?the reason is because we are not brokena�?.

The governora��s wife stated this Monday at a One-Day Prayer Conference with mothers drawn from the three Senatorial Districts of the state tagged: Mothers Arise; Let Your Voices Be Heard, with the theme: Brokenness: Needful For A Successful Walk With God, held at Unity Hall, Government House, Asaba.

Dame Okowa who harped on the theme of the event, said it is Goda��s requirement for maximum usefulness.

She charged mothers and those in the position of authority to be humble themselves as they were elevated by Goda��s grace, a�?except a seed falls to the ground and dies, it cannot produce fruita�? just she hinted that no position on earth was permanent.

a�?Any position you occupy is just for a while and it is by grace, you are not the best. God only selected you at that point in time and by the fullness of time, you will be dropped and somebody else comes ina�?, stressing that the deeds of man on earth would be marked by Christ and not man.

The founder 0a��5 Initiative who took her scripture reading from 1Conrinthians 11:1, said one would not have followership if his/her could not be emulated, a�?how can you talk to your children when you dona��t have any moral justification to say so?

She called on participants to examine their lives and do away with what was not of God in them, a�?if you are preaching the gospel and you are still doing those things that ought not to be, you are going to get a greater judgmenta�?, she warned.

She prayed that the word that was preached would not be held against those that heard them on the Day of Judgment even as she exaltedd participants to put the past behind them and forge ahead in their Christian life and appreciate all that yielded to the invitation.

Highpoint of the prayer conference was the offering of supplications to God for the church, family, communities, and state/governor and for the nation for peace and prosperity.