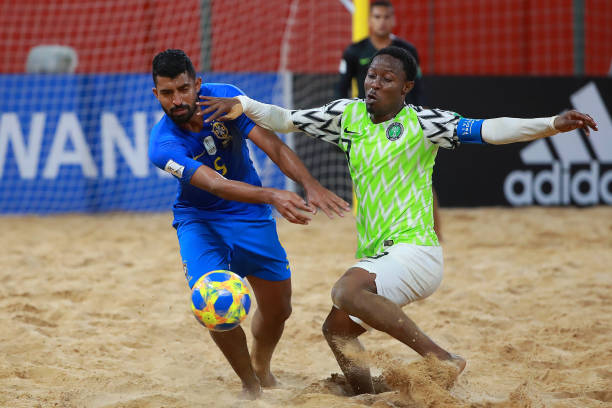 Brazil defeated Nigeria 12-2 in the last group match of Group D at the 2019 FIFA Beach Soccer World Cup in Paraguay.

The Super Sand eagles lost their first match against Portugal 10-1, before losing to Oman 6-5 in their second match of the competition.

They have already been eliminated before kick off but they had to play for pride against the defending champions, but unfortunately they fell like a pack of cards.

Rodrigo scored a hat-trick, while Bokhina and Rafinha each scored a brace Bruno Xavier, Catarino and Felipe completed the rout as Brazil booked a second round place in style.

Egan-Osi Ekujumi and Abu Azeez scored the two consolation goals for Nigeria to end the miserable World cup on a sad note for Super Sand Eagles.

Nigeria conceded 28 goals while scoring a paltry 8 goals in the competition.

Nigeria’s best ever outing in the competition was in 2007 and 2009 when they reached the last eight.

Why Wallabies skipper will rediscover form