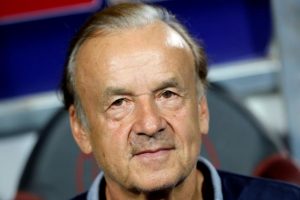 Manchester City winger Mahrez fired in from 20 yards with the last kick of the game in Cairo to clinch a 2-1 victory after Nigeria forward Odion Ighalo had cancelled out a first-half own goal by William Troost-Ekong.

“It was a big fight until the last minute. Algeria did better in the first half than us but we came back in second half and we conceded this goal in the last minute,” said Rohr.

“I think the players wanted to go to extra time and believed Algeria would be tired and they could win in it extra time.”

“I have to congratulate the players for a big fight against this very good team. They won it in the last minute and they deserved it,” he added.

Rohr again lauded the resilience of his team, which bounced back strongly to a shock loss to Madagascar by eliminating holders Cameroon and beating South Africa, but they had no time to respond to a stroke of genius from Mahrez.

“It was a wonderful match, but we lost it so we are not happy. We scored an own goal which was unlucky but we came back like throughout the tournament when there was something difficult against us,” he said.

“A wonderful free-kick made the difference.”