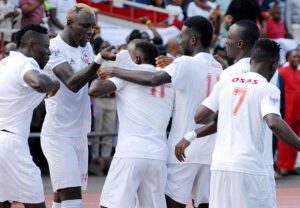 The Enugu club’s Technical Adviser, Olugbenga Ogunbote, told the News Agency of Nigeria (NAN) after both sides’ Match Day 6 fixture that Thursday’s victory over Rivers United was encouraging a�?because the league competition was still a long way to go”.

NAN reports that Rangers had beaten Rivers United 1-0 at the Nnamdi Azikiwe Stadium on Thursday in the NPFL match.

Kevin Itoya had scored in the 59th minute of the game off a Godwin Aguda pass to give the Flying Antelopes their second victory at home.

Ogunbote said the Rangers team would get better as the league competition progressed.

a�?The win is a good one against a household name in the Nigerian league such as Rivers United. However, most of our team’s members have not got into their right rhythm.

a�?But Rivers United players are in a good form at the moment.

a�?I would have wished we scored more goals, but most of the strikers we signed on are injured.

a�?But I know that by the time the team finds its rhythm, the players will begin to score more goals.

a�?I will just ask for the understanding of the fans. The league is still 32 matches to go,” Ogunbote said.

Speaking also after the match, Rivers United’s coach Stanley Eguma told newsmen that the slim loss was owing to a mistake by his team, and they have paid for it.

a�?We made a mistake and we paid dearly for it. We played well in the first half, but the second half was not good.

a�?However, this match has taught us a lesson and we need to work on our ability and we are still working on the team. We will get better as time goes on.

a�?Rangers are a good side. They played well in the second half and were hungry for a goal, and luckily they got it,” Eguma said.

NAN reports that Rangers have garnered nine points from a possible 18 so far, after winning three and losing three in the six matches they have played so far in the league.(NAN)

MOURINHO TO POGBA: You Will Never Captain Man.U Again While I Remain In Charge