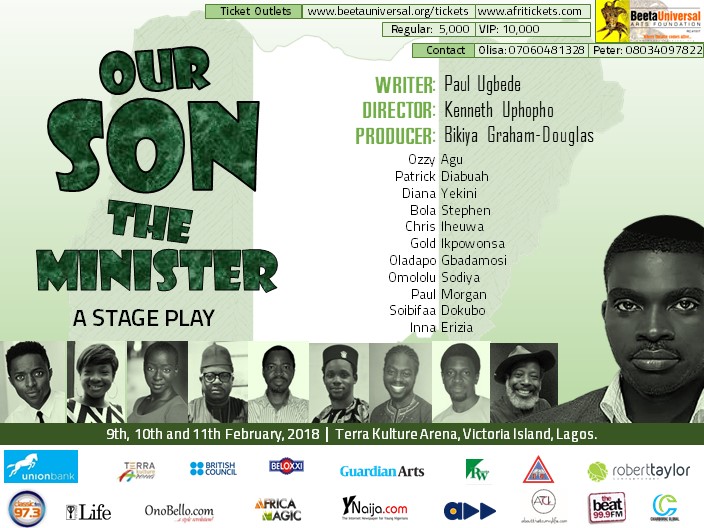 Sometimes history presents an anomaly; like a giant that crawls on its knees instead of stand on its feet. When a country destined naturally for greatness wallows in insolvency as a result of greed and self-aggrandizement. When a nation comes to a point of reckoning with its fault-finding as fingers are pointed and blows are exchanged.

The stage play a�?Our Son the Ministera�? raises a standard. In the mayhem of who is to blame and whose hands are soiled as regards Nigeriaa��s political eco-system, the play holds up a mirror to the society and highlights its culpability in making bad leaders.

a�?Our Son the Ministera�? is the winning play from the maiden edition of Beeta Playwright Competition organized by Beeta Universal Arts Foundation. Written by Paul Ugbede, the play is produced by award-winning actress and super talented thespian; Bikiya Graham-Douglas, directed by Kenneth Uphopho and starring talented actors to include Ozzy Agu, Diana Yekini, Patrick Diabuah, William Benson and others.

a�?Our Son the Ministera�? is billed to attract government officials, students, celebrities, politicians, art connoisseurs and some special guests. The play opens on February 9th through to the 11th at the famed Terra Kulture Arena Victoria Island Lagos. There would be two shows per day; a 3 PM matinA�e and a 7 PM encore.

Tickets are available online at the following sites:

I Can Never be a Pretender in this Nollywood Industry…Actress, Shan George