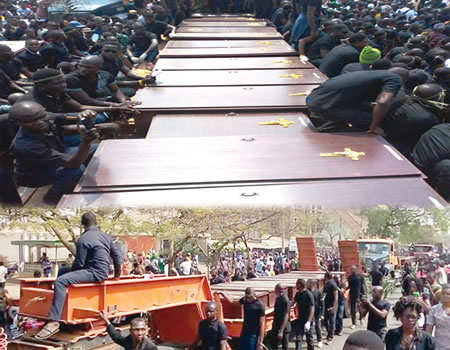 Cluelessness is an ordinary term clothed with extraordinary properties and turned into a national sing-song by Lai Mohammed et al, in their sustained and desperate effort to send lucky Goodluck back Otuoke where they believed, he ought to have been, as a fisherman or brewer of illicit gin. And as if that term was factory-made for GEJ, the appellation stuck, thanks mostly to high-wire propaganda spiced with fiction and faction, and concocted by dollarized foreign consultants. Mindless human butchery in Nigeria did not start in Benue and did not start with Benue people. It started long ago in the north where Igbos ( and anybody from anywhere after Otukpo was an onye-Igbo) were massacred at will starting from 1966, an action unabashedly coordinated by the northern establishment. The only difference in the recent case is that government is no as directly involved as then but its inaction has convicted it of complicity

Anyway, in recent times, it started from Jos and when they have decimated the indigenous of Jos, they tested the waters here and there and then from January this year, Benue became the center of coordinated killings. The height of it all was when Frs Gor and Tyolaha, along with 15 of their parishioners were gruesomely murdered in the morning of 24/4/18. Orthom became a modern-day weeping governor, asking the powers that be to prevent further attacks and pleading with PMB to come and see things for himself. President Buhari did not visit but rather offered explanations as to why he does not usually rush to crises-prone states and further found it more convenient to party with his support group on the day the long-planned and duly publicised mass burial took place.

It is in the Benus Killings that PMBs cluelessness was displayed to the whole world. The government gave so many excuses and eventually ran out of excuses. The government defended the herdsmen, justified their bloody adventures, made excuses for them tried to change the narrative in our very before, and did everything possible to even show that the Benue people, and other victims, were the aggressors. The government told a bewildered world that herdsmen were not Fulani, that they were foreigners, that they were trained by Gadhafi, that they were bandits and criminals but not terrorists, that coordinated invasion and annihilation of Nigerian citizens was caused by climatic changes as well as cattle rustling, Benue anti-open grazing law and disgruntled politicians. In terms of solution to the non-stop and one-sided bloodletting the government resolved to provide ranches and cattle colonies, import grass for the cows, beg the herdsmen to adopt modern methods of herding.( I have not heard from/of Audu Ogbe in recent times). Its response included sending policemen( our army suddenly ran out of motorized brigade, the type that invaded Kanu), directing the IGP to move to Benue, and he did not go and PMB told us plainly that he was unaware, pleading with the survivors not to revenge but rather live in peace with their killers, and termed it farmers-herdsmen clash. An armed group attacks another, kills every moving thing, burns down their farms and houses and then boldly occupy and the government calls it a clash? Anyway, Governor Dickson has settled that when he said Farmers clashing with herdsmen? Let's call a spade a spade! And to cap it all, Femi Adesina advised that it is better to be alive than to cling to ancestral land! We will soon find out ( when his tenure expires), whether he is the same Adesina that edited the Sun Newspapers or he is just one Femi Adesina, as it had happened before in the case of Ibori

The were so many laughable contradictions in the excuses and comments of the government that even the great Lai did not know how to respond. If the carnage is caused by the anti-open grazing law, why did theyattack Enugu, Ekiti and Zamfara? If theyare foreigners, (which means that the government knows them), why are we treating them with kid-gloves, why should we be asked to accommodate them and give them our land. If it is caused by politicians, why not give them the Saraki-Ekweremmadu-Melaye treatment? More than two years ago (3/4/16) Femi Aribisala released A Compendium of Buhari, APC's Textbook of Cluelessness. But I think he spoke too soon. PMB and his government has shown acute cluelessness in many issues (including their desperate attempt to haunt down Saraki) but the management or mismanagement of the these killings stands out as the greatest act of cluelessness committed by Buhari et al. Since they are the authors and finishers of cluelessness, I don’t need to interpret it for them.

Years ago, I learnt that a diplomat is somebody paid to lie for his government in another country. I am not sure of the source of this definition but I sure liked it and that is why it is still securely stored in my medulla oblongata! The diplomat lies for and about his government by being tactful and tactfulness is the same thing as diplomacy. Tactfulness is the ability to tell somebody to go to hell in such a way he or she looks forward to the trip. The diplomat also indulges generally in diplomatese, saying the right things at the right time and refraining from ruffling any feathers. He cannot tell the host president that he is naked, even when the president is 100% cloth-less. If he dared, he would be asked to go home for consultations for interfering in another country’s internal affairs. But this my age long idea of a diplomat changed recently when the outgoing French Ambassador to Nigeria, Mr Denys Gauer, identified impunity and injustice as the factors driving the killings and bloodshed in several parts of the country and that foreigners were not involved. Speaking during the 2018 French National Day in Abuja, he said among other things. I think impunity is encouraging the killings and those responsible must be punished. I don’t believe foreigners are involved in the killings…. When there is that kind of killing, there must be proper prosecution and perpetrators must be properly sentenced. If that does not happen, then, it cannot end.” So, that is that! Either Mr Gaur is not really a diplomat or he is tired of all the pretenses or because his tour of duty had ended, he decided, as our people would say, to speak the truth and shame the devil. Since we always agree with all foreign opinions, the government should listen to this undiplomatic diplomat and do the right thing without any further equivocation. But whatever the case, that man has changed my opinion about diplomats.

Other maters
Just the other day, the government of PMB acted as if Kanu( IPOB) was the only troubler of Nigeria. After an unnecessary show of force, which every normal government should be ashamed of, Kanu disappeared and I had expected some peace but who sai! Now for the past 3 years, the government has been after Saraki, who unfortunately knows the game more than PMB and his cohorts. The CCT trial was turned into a cardinal programme of the state and when it failed, the state moved into robbery allegation. And even when the AGF advised that he saw nothing on the neck of Saraki, the pursuit continues as shown in the recent police blockade. In the past one year, Kogi state has left its demoralized staff and rather concentrated on Melaye. He was accused of gun-running; orchestrating his own attempted assassination and now accused of attempted suicide. When will our leaders face their core duties of security and development, and stop chasing shadows? And why wouldn’t people know when the game is up?

How And Why I Stopped Going To Church – A Rejoinder

13 thoughts on “Benue Killings, Acute Cluelessness and the Undiplomatic Diplomat       ”