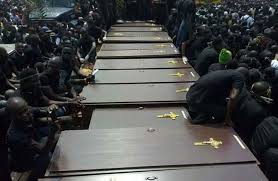 THE Convener, Northern Elders Forum, Mr Paul Unongo has charged Benue people to rise up and defend themselves if the Federal Government (FG) continued to deny them protection and security in accordance with the United Nations (UN) Charter.

Unongo stated this in an interview with journalists on Thursday in Makurdi.

He reiterated that if the FG continued to deny them protection and security they should urgently organise measures to provide security and protection for themselves, loved ones under the UN charter.

He called on the former Vice President, Atiku Abubakar to rise and quench the most dangerous all-consuming fire and challenge that was facing the North.

“I urge you to quench this most dangerous all-consuming fire and challenge facing the North. “I know you have the capacity to bring the dangerous situation under control before it consumes the whole North.

“It is your duty as a Prince of the Tiv Court to do so. We are friends and even some of our children are very close friends. I will never deny that in any situation,’’ he said.

Abubakar is a chieftaincy title holder in Tiv land and the title is “Zege Mule u Tiv’’ which means protective shell.

He said that he had earlier called on Abubakar to talk to the Miyetti Allah in order to end the senseless killings and he had threatened to institute N200 billion lawsuits against him.

He said that Abubakar was threatening to sue him because he dared to say truthfully that the former vice president knew Miyetti Allah and that he had confided in him of his tremendous influence in Miyetti Allah. – Vanguard

BREAKING: After Tanker Explosion, Another Accident On Otedola Bridge