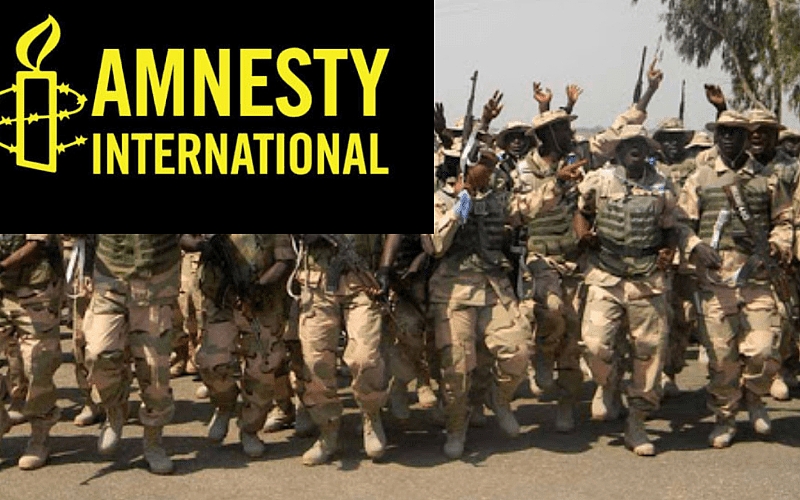 The Amnesty International Report 2018 on farmers/herders clashes has riled up the Nigerian Army Spokesman, Brigadier General Sani Usman, that he is threatening that the army would see to it that Amnesty International is expelled from Nigeria because their aims and objectives is to destabilize Nigeria. Talking to anchors of Sunrise Daily on Channels Television on December 18, 2018, the army spokesman claimed he has evidence that Amnesty International is trying to disrupt Nigeria but he would not divulge the information because it is not yet time. Shortly afterwards he also appealed to Amnesty International that they can work together with the army. Now this is contradictory. You want to work together and is appealing to an organizations that you claim you have evidence against that they are trying to disrupt the peace of the country? Amazing.

Thousands of people have been massacred and no one has been prosecuted for these killings. It is this that drives the crisis. The people who are responsible know that they can get away with it. There hasn’t been any investigation to track down perpetrators of these killings. In fact when some of the killings were going on, the federal government was busy telling the people affected that they must provide land for grazing for the herdsmen as they have been grazing on these routes for years. President Muhammadu Buhari even told the people being killed to be their brother’s keeper by giving them grazing land. The president’s spokesman, Mr. Femi Adesina, talking on AIT asked if the farmers preferred being killed than give a piece of their land.

The president himself pretends that he doesn’t seem to understand what is going on. In London he told the Arch-Bishop of Canterbury that the killers were Mamman Ghadafi trained militias, in the United States he told Donald Trump that Fulani herdsmen don’t carry arms but just sticks and knives to cut their ways through the bushes, and his DSS told Nigerians that the killings were being perpetrated by ISIS-West Africa. Yet when he gave the orders to deal with the perpetrators when the whole thing started becoming embarrassing to the his administration, all the people the army and security operatives dealt with were Fulani militias. Can you blame those who opined that the president and his security men took side with the herdsmen in these crisis because they are his people? Can you blame those who started questioning why all the heads of security apparatuses are Muslims and from the North? This same President went to China and told Nigerians that the media twisted the Fulani/herdsmen crisis, of course to the president the media twisted it in support of the farming communities.

The action and inaction of this administration clearly shows negligence and nonchalance when people are being killed. It is this that angered General TY Danjuma (retired) when he addressed a convocation at Taraba State University and told the crowd that the people being attacked and killed all over Nigeria should defend themselves as no one is coming to protect them. I believe he accused the army of being part of the crisis.

I listened to Osai Ojigho, the Director, Amnesty International, on the same Channels Television before Brigadier General Usman Sani came on board and she was simply elaborate and explicit. She explained the process they went through before they compiled their reports. They went to over 50 communities and spoke to people affected, they also wrote to government of states affected and got feedbacks and they wrote everyone involved, even the army, but the army refused to talk to them and cooperate.

Brigadier General Usman Sani, the army spokesman’s attempt to discredit Amnesty International and threatening any International or local organization that disagrees with the army wouldn’t help the army. What would help the army is to work with media houses, recognized bloggers, NGOs and themselves try to investigate some of these allegations. The army spokesman needs to understand how democracy works. Using intimidation to stop others from doing their jobs because it discredits some activities of the army or the regime wouldn’t solve the problem.

Buhari’s 2yrs In Office: A Celebration Of First Of The Firsts In Failed Governance Records In Nigeria Since 1960

THE ILLEGALITY OF OKORICHA AS A GOVERNOR WITHOUT EZE MADUMERE

10 thoughts on “Between Amnesty International and the Nigerian Army ”