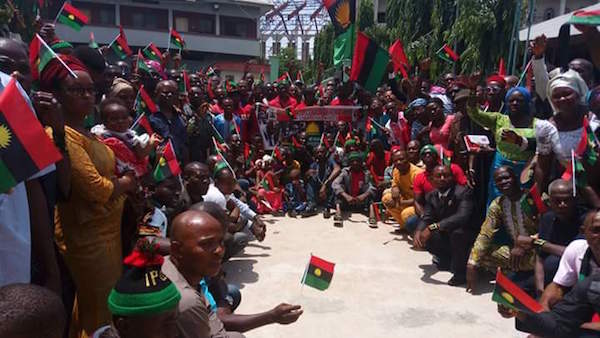 The 17th-anniversary celebration to mark the call for a republic of Biafra paralysed social and economic activities in Onitsha, Anambra on Monday.

Some members who came from Nnewi, Awkuzu, Ogidi, Nkpor and Aguleri were seen moving on foot, in cars, tricycles and motorcycles which greatly slowed down vehicle and human traffic.

Addressing the members, the Anambra North Zonal leader of MASSOB-BIM, Mr Vincent Iloh, reiterated the resolve of the group to sustain the agitation through peaceful means.

“It is exactly 17 years today; what we in MASSOB-BIM are still saying through non violence is for Biafrans to be granted independence from Nigeria.

“That was what our great hero and the Peoples General, late Dim Chukwuemeka  Odumegwu Ojukwu tried to do in 1967 but was misunderstood.

“This is what the new Biafran leader Chief Ralp Uwazurike has continued to say since 1999 without the use of force.

“Until the needful is done, we will not relent.

“We want Biafra because the resources of our land have been confiscated with military might to develop other areas while we are left to wallow in state of despair”, Iloh said.

The army, police, navy and civil defence were on the ground during the rally which lasted for several hours to forestall any breach of peace.