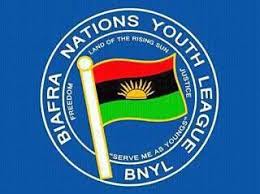 Biafra Nations Youth League, BNYL has rubbished the Presidency for comparing the Miyetti Allah Cattle Breeders Association, MACBAN, to the Igbo socio-political orgnisation, Ohanaeze Ndigbo, and that of the Youruba’s Afenifere.

Reacting through its Acting National Leader, Ebuta Victor Takon, BNYL said it was an insult to compare a terrorist Organization to an ethnic based Organizations.

Everyone knows MACBAN is behind Fulani killings, if the Presidency can make such utterances, invariably, they have proven to be the backbone of the jihadists activities in other parts of the country” Takon hinted.

He said the Ohanaeze Ndigbo and other ethnic based groups like Ijaw Youth Council, Uhrobo Progressive Union,are well respected, non-violent bodies. “whoever compares MACBAN to these Organizations should be examined closely, that person might be having psychiatric challenges either as a result of old age or the usual mental sickness”.

The BNYL’s Chief wondered why the Presidency could sideline the Arewa Consultative Forum, ACF and positioned MACBAN as mouthpiece of the North.