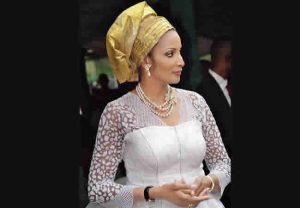 The peace that has hitherto reigned in the Anambra State chapter of the All Progressives Grand Alliance (APGA) may be facing a heavy threat following the declaration of interest by the wife of late Dim Chukwuemeka Ojukwu to run for Senate to represent Anambra South senatorial zone.

The zone which is currently represented by Dr. Andy Uba also has other bigwigs in the party like chairman of capital oil, Dr, Ifeanyi Uba and Prince Nicholas Ukachukwu who are eying the seat.

Uba had earlier in the year declared his interest in contesting the seat saying that it was the only way of giving the people of the zone good representation.

He also visited the state party chairman, Chief Nobert Obi in his home in Awka to formally make his intentions known and the chairman praised his courage saying Uba’s desire to run was a welcome development.

As it stands, the state chairman of the party who incidentally is from the same zone is alleged to be under pressure to endorse the candidacy of Ojukwu’s wife.

According to the coordinator Anambra South Integrity Forum (ASIF), Chief Olisaemeka Muoma who spoke with reporters in Awka, he regretted that the internal democracy of APGA is being destroyed “by the wife of our late leader Dim Chukwuemeka Odimegwu Ojukwu.”

He added: “She has been going about threatening to deal with any person or group of persons that would want to oppose her ambition.

“Bianca Ojukwu has vowed to create crisis of confusion in our party and to ensure that her opponents and fellow aspirants are expelled from the party if she is not given the senatorial ticket on a platter of gold.

“Her supporters have been boasting that not even the governor Chief Willie Obiano and his wife can stop her from flying the flag of the party in 2019 National Assembly Election”.

He explained that APGA as a political party has a constitution which stipulates the guidelines for the conduct of primary election saying that it must be strictly followed.

He called on the National Chairman of the party, Ozo Victor Oye not to allow himself to be used to destroy the party by handing over the Anambra South Senatorial ticket to Bianca Ojukwu saying that she has contributed next to nothing to the growth and success of the party.

“Bianca, due to her position as the wife of our late leader has been milking the resources of the party since its formative stage and has been using all forms of blackmail and harassment to rip off hundreds of millions of naira from the state and successive state governments since the regime of Mr. Peter Obi till date.

“We have resolved to ensure that this planned charade does not succeed through every means possible”, Muoma stated.

The vice chairman of the party for Anambra South Senatorial Zone Chief Titus Anigbogu who spoke to journalists said that no aspirant has the capacity to force him or herself on the party.

“Our party APGA has guidelines for our primary elections and we cannot change the goal post in the middle of the game.

“I also wish to make it clear that from the post of state Assembly, Federal House of Representatives to the Senate; we do not have any anticipated candidate, everybody must follow the constitution and process of our primary election.

“I also want to use this opportunity to reassure all our aspirants and party faithful that a level playground would be provided for a healthy, hitch-free and fair primary elections.” Calls placed to Bianca Ojukwu’s phone for her reaction did not yield any result as the phone rang repeatedly but was unanswered. (Credit: News Express)