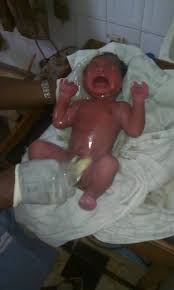 A newborn baby was on Thursday morning found unclad at the premises of a Female Hostel at the University of Maiduguri, students have said.

The baby, who was said to have been found few minutes after birth, was seen with blood stains and was crying.

At about 4am today, a female student heard the cry of a baby at the second floor of Titanic hostel before rushing to the scene to rescue the newborn baby.

“I had thought it was a cat not until I flashed my touch light before realising it was the cry of a newborn baby,” says an eye witness who does not want her name in print. “I couldn’t bear the shock; I then screamed before other female students joined me at the scene,” she said.

It took combined efforts of the students to quickly cover the baby with their wrappers and called the hostel officials for help.

The mother of the abandoned baby was later traced to Room 17, second floor of Titanic female hostel, says Joy Peter, whose hostel is close to Titanic.

“When some female students and the hostel officials gathered at the scene, they immediately traced the mother of the abandoned child to room 17 by blood stains on the floor,” Peter said.

Miss Peter added that the act by some pregnant female students to give birth in the hostel and later abandon the baby is fast becoming a regular occurrence, insisting that the school authority should consider regular pregnancy test for the female students and ensure that they are closely monitored.

“This is happening for the third time now, it had happened in Murtala Hostel, then Aisha and now Titanic. I think time is ripe for University of Maiduguri Management to consider regular pregnancy test for the female students,” Peter said.

Another female student who frowned at the development, Stessy Nuhu, urged the University security officials at female hotels to step up their game and ensure that newborn babies don’t get abandoned within the school.

“I don’t think the security officials, particularly the female officials are doing enough to keep an eagle eye on activities within the female hostels. They will have to sit up and ensure we don’t witness this ugly incident again.

“And for my fellow female students, if they are not ready to give birth, they must quit having unprotected sexual intercourse,” Nuhu said

The UNIMAID authority is yet to confirm the incident but the Chief Information Officer, Ahmed Mohammed said the school management will look into what happened.”

For now, students said the newborn baby and the mother have been taken to an undisclosed heath facility.

More Than 2,000 Borno IDPs 'Return' To Their Homes In Guzamala Local Government