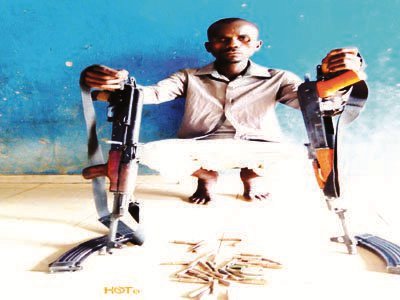 Operatives of the Inspector- General of Police (IGP) Intelligence Response Team (IRT) have arrested a suspected leader of a notorious kidnap gang.

The suspect, Barau Ibrahim, alias Rambo, was arrested about 1:30 am yesterday at Maraban Yakawada in Giwa Local Government of Kaduna State by IRT operatives attached to ‘Operation Absolute Sanity’.

Also arrested was Shehu Abdullahi, 40, alias Gashin Baki, said to be a member of Rambo’s gang.

It was gathered two AK 47 rifles, two AK 47 magazines with 51 live ammunition and a Volkswagen Golf car were recovered from him.

Efforts are on to nab others.
Operatives of the Federal Special Anti-Robbery Squad (FSARS) at the weekend in Lagos killed a notorious robber said to have been on police wanted list for 18 months.

The suspect, John Maxwell, aka AWA, was killed at Ajangbadi after he opened fire on detectives.

The Nation learnt that Maxwell was identified by another suspect, Chidiebere, alias Chiboy, who was arrested about two weeks ago.

The source went on: “They have been terrorising Ajagbandi axis of Lagos. He (Chyboy) was nabbed with one of the gang members on Atan Road, Agbara in Ogun State, about two weeks ago. Seven rounds of AK47 ammunition, six rounds of revolver pistol ammunition, 28 rounds of live cartridges and five rounds of 9MM ammunition of Bareta gun were found at Chiboy’s home.

“He confessed to have taken part in the Offa bank robbery in Kwara State, where policemen and civilians were killed. Chiboy promised to lead FSARS operatives to his colleagues, which he did.

“On Thursday morning, Chiboy told our team that John Maxwell and one Obilo were going to rob. Operatives were deployed in Iyana-Era roundabout and Chiboy was handcuffed in the car.

“Immediately he saw John Maxwell, he identified him. Our men went after Maxwell, who noticed he was being trailed and started shooting. He was shot during exchange of gunshots. The policemen took him to a nearby hospital where he was certified dead.

“He was searched and two Berretta pistols with 22 rounds of ammunition, including one expended ammunition, were found on him.”