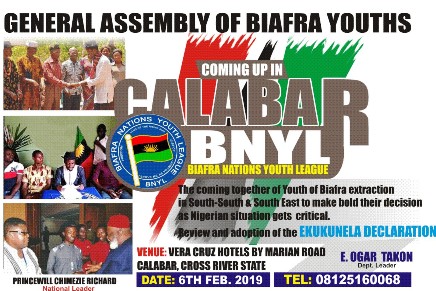 Biafra Nations Youth League, BNYL has stated that it will not a party to destabilize the 2019 election. The group was reacting to the announcement of a new referendum date by the Indigenous people of Biafra, IPOB.

National Leader of BNYL, Princewill Chimezie Richard disassociate the group from the referendum day adding that they have no decision to destabilize the election.

“We have not reached any decision concerning that move, and it is not our intention to destabilize the election”.

The group said the purpose of the General Assembly is to draw a new line of action, regarding the current situation in Nigeria. It would also decide on the election boycott campaigns.

BNYL concluded that the general assembly would also review and adopt its resolution known as the Ekukunela Declaration, made two years ago during a Leadership Congress at the Ejagham town of Ekukunelaour in Ikom local government area of Cross River State.

” It was nicknamed Akwa-Cross Declaration following a first Congress at Uyo before that of Ikom where we concluded.

There is need for the entire members to review it, if any necessary amendment, we will do because it serves as our Organizational guildline. We will also make it public. Therefore, we call on all well meaning Biafran youths to join us at the General Assembly in Calabar by 12pm.”