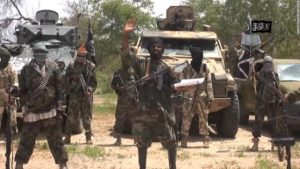 The terrorists launched the attack in the evening, targeting a military base and the police station in the town, but they were repelled soldiers deployed under the Nigerian army’s Operation Lafiya Dole.

The attack and subsequent gun battle lasted for at least two hours before the insurgents were chased out of the village by federal forces, according to sources.

Villagers were reportedly left scampering into bushes for safety as the military engaged the armed group in a gun duel.

The military and emergency agencies have yet to issue any statement about the attack and to provide additional details about the impact.

Jakana town is situated along Maiduguri-Damaturu-Kano highway, which is considered the safest route to and from Maiduguri.(channels Tv)

How the hell has he managed it?