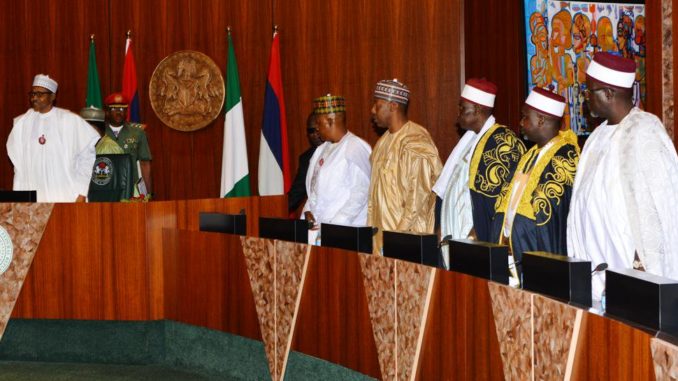 A delegation of the state Governor, traditional rulers, elders, national and state assembly members, ‎local government chairmen, women groups, the Nigerian Union of Journalists and labour unions, all of them in a delegation from Borno State, on Monday presented a letter containing security-related “observations” and ten undisclosed demands to President Muhammadu Buhari at the Presidential Villa in Abuja.

The demands are connected to measures the delegation hopes, can if granted by the President, help in the efforts to end the Boko Haram in the state.

Leading the delegation, Governor of Borno State, Kashim Shettima, said the demands and observations are the outcome of an extraordinary security meeting which he convened in Maiduguri last week Monday.

Shettima in his opening remarks informed Buhari that he was presenting a letter on behalf of the delegation but he pleaded with journalists that because there were matters of security, he was not going to disclose both demands and observations. He also said the delegation would discuss the issues raised in closed door meeting with the President.

“Your Excellency, we came with some observations and 10 specific requests for urgent presidential intervention. These observations and requests are products of discussions in the aftermath of our extraordinary security meeting held one week ago. We didn't rush to come after the meeting. We felt the need to travel to northern Borno, interact with displaced persons and the military so as to strengthen public confidence.

I will seek the understanding of journalists by not making public, any of our observations and 10 requests. They are matters of security, which we hope to discuss with Mr President in closed door. I will like to recall with profound gratitude, that in our extraordinary meeting last week, we brought on board, leadership of the Nigerian Union of Journalists in Borno State and we took them into confidence. True to their promise, none of what we discussed in that meeting was revealed through any media platform. Such an attitude displayed by the media, is a further proof that Nigerian journalists are without doubt, devoted to sincere measures in the fight against Boko Haram” Shettima said.

The Governor also explained that the people of Borno State have demonstrated the highest commitment to the fight against Boko Haram by donating their sons and daughters who have been fighting in battle fronts as volunteers under the Civilian JTF.

“Mr President, from 2013 to date, more than 20,000 youth volunteers amongst them young women, have offered themselves in fighting Boko Haram under the Civilian JTF. These youths are sons and daughters of the same people of Borno State that were accused of undermining the fight against Boko Haram. From 2013 to date, our administration has been solely responsible for funding hundreds of successful operations carried out by the Civilian JTF. We have been have been responsible for their recruitment after thorough vetting by the DSS. We fund their training, kit them, provide them operational vehicles and maintain these vehicles. We pay their allowances, supply them surveillance gadgets and we deploy them on the advice of security establishments. Most importantly, these Civilian JTF are good in gathering local intelligence and they are experts in identifying Boko Haram members no matter how they try to conceal themselves. They have done so much with our consistent support and we seriously have supported and continue to support all security agencies, particularly the military” the Governor noted.

He recalled that a delegation in Borno State was in the Villa because unlike in previous years when they were treated with suspicion, President Buhari has demonstrated empathy and compassion to Borno people.

“Mr President, Sir, the purpose for which we are here comes with one irony.

Borno State suffered it's worst times between 2013 and 2014. In that period, Boko Haram abducted our children, attacked and took firm control of 20 out of the 27 local government areas of Borno. In these 20 local government areas, they established caliphates and put in place, sovereign administrators who strictly enforced tax systems and violent laws. They abused our young daughters. They forced young men to join their fighters. They turned old men women into domestic slaves and they publicly executed parents in the presence of their own children and wives, for allegedly offending laws that are even alien to the religion of Islam. While administering our 20 local government areas, Boko Haram operated from council local secretariats in headquarters of local government areas and lived in palaces of traditional rulers, military barracks and police stations.

On the other hand, from 2015 to 2018, the Nigerian military with you as commander in chief, was able to liberate all the 20 local government areas hitherto under the Boko Haram. The military even took control of Boko Haram’s main operational base in the Sambisa forest. With these successes, the Borno State Government was able to rebuild more than 30,000 homes in various communities with all public facilities restored. With Mr President's leadership, many of our hitherto displaced brothers and sisters, including some of our traditional rulers, voluntarily returned to rebuilt communities in 14 local government areas including Bama.

Mr President, I recollected all these for the sole purpose of establishing the irony in our visit today.

As I explained, between 2013 and 2014, we witnessed the most daring and most vicious evil of the Boko Haram, loosing 20 local government areas. However, we rushed here because Boko Haram threatened to retake Kukawa. And Kukawa is just one of the 20 local government areas we had lost in the past but which the military regained under your leadership.

Mr President, the truth is that in the past, we were regarded as the problems rather than the victims. Government, elders and the people of Borno State were seen as undermining the war on Boko Haram. We were treated with suspicion” he said.