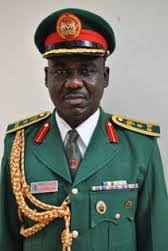 The Rights group has also called for adequate funding and transparent use of the public fund to procure better fighting weapons to check the sudden resurgence of boko haram terrorists and the killings of many soldiers and civilians in the North East of Nigeria.

In a statement by the National Coordinator Comrade Emmanuel Onwubiko and the National Media Affairs Director Miss Zainab Yusuf, HURIWA condemned the participation by service chiefs of the inaugural political campaign by the presidential candidate of the ruling All Progressives Congress (APC). The group said their presence smacks of partisanship and may significant lead to erosion of trust regarding the integrity of the electoral process. HURIWA why military chiefs who ought to be thoroughly professional have decided to play divisive politics at the detriment of the statutory place of the military.

The Rights group rejected as infantile and laughable the explanation offered by the presidency for the gaffe by the service chiefs that they unknowingly attended the event just as the Rights group said if the excuse by the presidency is correct and anything to go by, it then portends danger because it means that our national security is endangered if service chiefs in their entirety without exception can saunter into an event without prior invitation or prior intelligence. HURIWA stated that the excuse is the surest reason to immediatelly sack them and appoint professionally competent service chiefs who would have effective intelligence at their beck and call and would not operate casually like jobless people looking for a venue to unwind.

“How do we rely on such Generals to protect the territorial integrity of Nigeria effectively and efficiently if they lack simple intelligence about the nature of a meeting that they attended in the same venue that they often visit to brief the commander-in-chief? This lie is undone and not adequately cooked by those who fabricated it at the state house in Abuja which is the same place they told Nigerians that some invading rodents chased President Muhammadu Buhari from his office.”

“The action of the serving military officers heading sensitive constitutional offices attending a political campaign of one of the candidates amongst over 70 others, is unpardonable and is capable of and indeed has affected the credibility, impartiality and integrity of those institutions under their leadership especially as Nigeria prepares for the make or mar national election in only about few weeks time.”

HURIWA relatedly lamented that the security chiefs are spending resources and time attacking credible local and international bodies such as Amnesty International, just as HURIWA has also tasked the military chiefs to change their combat strategies since the counter terror war is not producing meaningful results.

The Rights group said it was regrettable that whilst the Defence headquarters sits back comfortably in the air-conditioned office complex in Abuja attacking Amnesty International over reports of human rights violations by soldiers, the combatants who are reportedly not well equipped and motivated are been reportedly and mercilessly slaughtered by armed Islamists in the North East.

HURIWA said every right thinking patriot in Nigeria should be worried that Boko Haram has killed 44 soldiers and nine farmers in three days of attacks on some villages in Borno State as reported by AFP.

HURIWA said it has become necessary for a change of tactics since according to the report, which quoted security sources, the Islamic State West Africa Province, a Boko Haram splinter group, killed at least 44 soldiers in attacks on three military bases at the weekend.

” We read with consternation that that out of the 44 soldiers, no fewer than 43 were killed on Sunday in Metele, a remote village near the Nigerian border with Niger, according to a military officer, who spoke on condition of anonymity.”

HURIWA recalled that a military officer stated, “Our troops were completely routed and the terrorists captured the base after heavy fighting,” adding that the base commander and three officers were among the dead.

HURIWA faulted the press conference in which the Acting Director of Defence Information, Brigadier-General John Agim, alleged that the Amnesty International had designed counter-productive plans to frustrate the war by recycling old reports even as the Defence spokesman claimed: “If you read reports of Amnesty International, the one they have started publishing this year is what happened in 2012, 2013, 2014, 2015 and they recycle it every month. So, when you will see their reports, you will think the security agents have done something new. But if you take time to profile the reports, you will discover that they are repeating the same thing.”

HURIWA tasked the military to face their duties and welcome constructive criticism with open minds and make amends so as to become a thoroughly respected military institution in Africa and a reference point in the World.