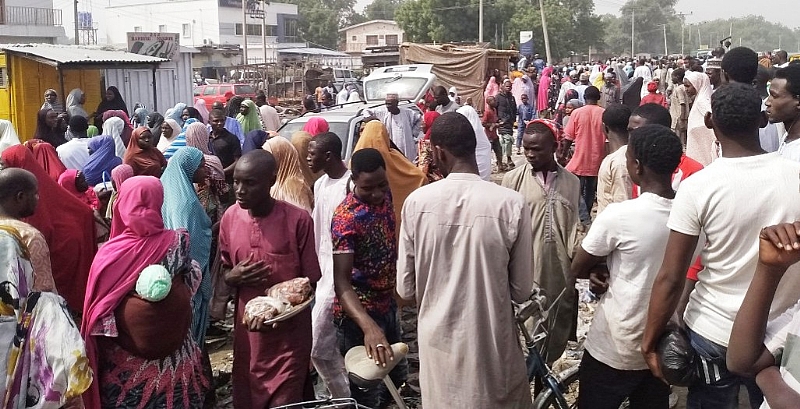 Residents And IDPs Stranded.. No Food, Drugs and Security.. . No Vehicular Movement, Residents Trekked to Maiduguri, Neighbouring Villages for Safety…

From all indications, troops have been deployed to Baga, Monguno, Kukawa and Gucamala in hundreds as seen in a military convoy leaving Maiduguri city towards the areas since morning of Monday, 31st December 2018.

But investigations Wednesday reveals that still Boko Haram elements are still present and in occupation of Baga town, Monguno town, Kukawa, Cross Kawuwa own, Malamute Fatori, headquarters of Abadam LGA of Borno state that shares International border with Niger and Chad Republics and Guzamala LGA area as all military formations and units in the places have been abandoned or deserted by the soldiers haven withdrew back to Monguno Military Brigade Command and Operation Last Hold Headquarters.

The Boko haram occupation rendered all the three to four LGAs inaccessible without the military and placed the areas at risk. It leaves residents vulnerable to Boko Haram attacks on the host communities and IDPs in IDPs camps in these places.

A resident of Monguno who ia still in Monguno town with his aged parents in a telephone conversation with The Nigerian Voice said,” Monguno is still occuppied by Boko Haram as at this hour that I am speaking with you on phone. You can not find a single soldier in the host communities and IDPs Camps of Monguno town. “

” All the soldiers here ran away and returned to the military command headquarters. Monguno is presently occupied by the boko Haram Insurgents. The aged men, women and children who could not flee the town during the Boko Haram invasion and attack on Monguno on Monday night through Tuesday last week became vulnerable to the terrorists'.

“It is from Monguno that the Boko Haram terrorists left for Baga town Tuesday night after attacking Cross Kawuwa , Kekenu and Monguno towns Monday and Tuesday.

“All the young people fled their families and relations to neighboring towns and villages of Kukawa, Gubio, Magumeri, Gajiram, Maiduguri and others for safety”, Kolo said.

“Some are still in the bushes because we can not ascertain their whereabouts. They are bedevilled by fear of being attacked or killed by the soldiers or Boko Haram terrorists during exchange of fire.

“Now, anyone that wants to leave Monguno town can only achieve that by trekking to the nearest village or town as there is no single vehicular movement in Monguno town that can convey people or goods out of Monguno to anywhere as roads linking Monguno are inaccessable due to the Boko Haram siege.

“Yes. Actually, the roads are not closed but nobody càn ply such roads with these Boko Haram attacks anyhow. The roads are not safe for anybody even the military can not boast easily of plying the roads just like that without fully prepaired, armed and ready to face the Boko Haram insurgents who have already occupied veryhwere, the towns and villages, particularly, those towns and villages along the major roads linking Monguno, Kukawa, Guzamala and Baga towns.” Kolo said.

Musty Aisami another source further said that,” The Residents of Monguno left behind, the old aged and children are helpless as nobody seems to assist or support them with food, drinks or anything else for now.”

” No help no support from anybody. They are all stranded and helpless as nobody goes there or comes out from Monguno yet like all these NGOs and humanitarian partners to hat support the IDPs and host communities.

“There is no single soldier in Monguno own with the residents and IDPs for now. They have alleeruened to the attacks. So, with this situation, bin availability of security operatives at the host communities and IDPs camps in Monguno” Aisami said.

“People have fled for safety. Even Cross Kawuwa is no longer safe for people which is a direct link for the Boko Haram from Malamute Fatori town, headquarters of Abadam LGC of Borno state, an axis that shares international borders with Bosso Province of Niger Republic.

“This is an area that for long has been under the occupation and control of the Boko Haram including Guzamala bad Kukawa LGAs surrounding environs or bushes as nobody goes there where the Boko Haram are spread and only usually group themselves whenever they want to strike or attavk any town or village and Military formations in the northern.lart of the state,' Musty said.

“In fact, I am telling you the truth now that, there is no single soldier in Kukawa, Guzamala and Kaga towns. They have all withdrew and relocated to Monguno, the military headquarters Operation Last Hold and the 127 Brigade Command Headquarters.

“Meaning, all these places are not safe , starting from Monguno to Cross Kawuwa, Kukawa and Guzamala be except if by today (Wednesday)that the soldiers will be deployed to be in Baga town.

“If not, here is no soldier in Kukawa and Guzamala LGAs and Baga town. There are no soldiers and except for Baga where the Task Force Brigade is available. People can come to see for themselves.

“People left behind are Stranded . No food. No security. No comfort. No relief. They need help. Government should come and do something about it.

“It is a lie that all roads linking o Baga, Monguno, Cross Kawuwa and Kukawa or Gudumbali town (Guzamala LGA headquarters) are opened and not closed. We heard that on radio that the roads are not closed but where some the vehicle and Security for people to ply the roads? He asked . Everywhere is empty, abandoned and deserted.

” The military formations are not closed but it is the soldiers that deserted their base in these areas”.

Another source Madu Kachallah said, ” I am among those who fled from Monguno two days ago and now in Maiduguri town by God's grace. “

” We suffered and met lots of hardships on the roads like check points mounted by the CJTF and Military of Gairam, tungushe and Shagari low-cost near Maimalari barracks before entering Maiduguri.

“Most of us are still in the street at Baga road without food, phone, money, shelter and support from anybody or organisation yet. Just surviving from hand to mouth but no embarrassment or intimidation from anybody as people know our plght

“Yes I'm in Monguno town. There were casualties on both the sides of the military and Boko Haram that we saw when we were running away to escape the town but don't know how many.

“People run to Gajiram and Tungushe areas to get vehicles or Keke NAPEP or trekked to Maiduguri. Yes. There is checking on the Displaced persons at the Baga road Maiduguri as CJTF and Secuirty operatives do patrol the areas daily, morning and night” , Kachallah said.