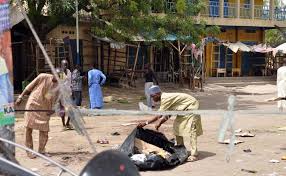 Reports emanating from Adamawa State indicates that about five people were feared dead and others abducted in a fresh attack by Boko Haram on Pallam community in Madagali Local Government Area of Adamawa.

The attack came barely a week after the terrorists launched a similar attack on neighbouring Wanu, Kamale and Kafin Hausa communities of Michika and Madagali areas.

Pallam is the hometown of the Deputy Speaker of the Adamawa State House of Assembly, Emmanuel Tsamdu.

Fleeing residents said the onslaught lasted for about five hours.

a�?They sneaked into our town Pallam, midnight at about 11:00pm, and started shooting sporadically, killing and burning houses. They (Boko Haram) abducted some of our people, mostly men.

a�?I escaped by the whiskers and fled into a nearby hiding place before escaping; no soldier came to our rescue. For now, I can’t tell the exact figures of the casualty. It was terrible!,” a fleeing resident, Abamu Japhet, said.

Confirming the night attack, a member representing Madagali, Michika at the House of Representatives, Adamu Kamale, said the terrorists a�?killed even livestock, looted and burnt many houses.a�?

a�?I got a distress call that they had, again, launched a night attack at Pallam. As I speak, the casualty figures is yet to be ascertained, but they killed and abducted people and burnt houses. Even before this attack, the terrorists had earlier ransacked Wanu, Kamale and Kafin Hausa communities. In fact, hardly a day will pass without attack, let the government wake up.

a�?We want President Muhammadu Buhari to visit us and see the horrible scenario being meted on our communities,” he said.

On his part, Madagali council Chairman, Mohammed Yusuf, said the gunmen stormed the village and a�?burned down houses and shops belonging to returnee Internally Displaced Persons (IDPs), our people. Adamawa is the only state bordering Borno, that is why we are susceptible to attacks. In the process, they killed three people,a�? he said.

Yusuf called on the authorities especially, federal and state governments a�?to intensify efforts in dealing with the security situation. The military is doing their best, but they are not doing enougha��The border is porousa��a�?

When contacted Monday afternoon, Police spokesman in the state, Othman Abubakar, said he was yet to be briefed on the development.

a�?I am yet to get details of the attack, but I will get back to you later,a�? he said.

One Dead, Many Arrested As Soldiers Invade Rivers Community