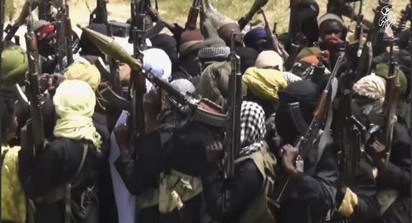 Gunmen suspected to be members of the Boko Haram insurgents attacked Dapchi town in Bursari Local Government Area of Yobe State yesterday Monday around 6 pm in an attempt to abduct school girls of Government Girls Secondary School Dapchi located at the outskirts of Dapchi town.

The Yobe State Commissioner of Police CP Sumonu Abdullmaliki, confirmed the attack to newsmen in Damaturu

According to the CP, the attack started in the evening around 5 pm when the BHT started gathering themselves gradually assembly near the school but security forces were drafted to the area to repel the attack confirming that already the military were on ground to repel the attack.

However, he said there were no details on the attack yet, but maintained that the security agents were on top of the situation.

It could be recalled that Dapchi is 100 kilometers north of Damaturu, the state capital, and it remains one of major towns that has not recorded an attack from the boko haram terrorists since the beginning of the boko haram insurgency in the north east region.

In spite of the recent attacks by the boko haram insurgents in the north east region, the military insists that the Boko Haram insurgents have been completely defeated.

This was the position of the Theatre Commander, Operation Lafiya Dole, Major General Rogers Nicholas during this monthly press briefings in the operational activities of the theater command.

a�?My soldiers are in the heart of Boko Haram enclave, that is, the Camp Zairo. The gallant troops have taken total control of Sambisa forest. We have broken the heart and soul of Shekaua��s group, taking over the camp and its environs,a�? Nicholas said.

Similarly, It will be recalled that speaking on Thursday last week while inaugurating a Surveillance Unmanned Aerial Vehicle (UAV) produced locally by the Nigerian Air Force, President Muhammadu Buhari assured Nigerians of the Federal Governmenta��s commitment to ending the insurgency.

The President said his administration was working tirelessly to tackle other related crimes across the country, and to restore Nigeria on the part of economic prosperity

2019 Election: Names Of Presidential Candidates As Released By INEC

We Are In Possession Of credible information That Atiku, PDP Ate plotting against Nigeria — FG