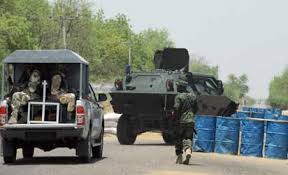 Gunmen in military uniform, suspected to be members of Boko Haram terrorists intercepted Governor Kashim Shettima of Borno State campaign tour Convoy of over 100 vehicles filled with security men, politicians, businessmen and women, CJTF, Vigilante Hunters, senior government officials, media, APC leaders, supporters, members, youths and women including Ohaneze-Ndigbo leaders on the entourage, killing a CJTF member who was shot on the head, a soldier who was giving cover to the over 10 vehicles carrying over 100 people that were cut off and immediately made u-turn back to Dikwa Tuesday night around 6. 47 pm.

The BHTs also siezed 8 Vehicles carrying people including a permanent secretary to the state government, three district heads from Rann, Dikwa, CJTF members in two of the CJTF vehicles, businessmen, party supporters and members belonging to Yellow and PRO Babakaura of CJTF, GSM Dealers among others.

A survivor, Musty Mohammed Jidda and one of the youths and APC supporter said,” when the BHTs launched the attack intercepting the long queue of vehicles in the governor's convoy, those that are close to the scene of the attack immediately made u-turn back to Dikwa. “

“But on our way to Dikwa the military refused to open the gate at Gajibo and we have no option than to sleep there with the military who gave us cover.

“The BHTs did not chase us or come close to the military gate where the military cehck point is mounted. We slept there till this morning before we were allowed by the military to return to Dikwa town where we waited for the governor to return from Gamboru Ngala to join him and return to Maiduguri,” Musty said

Another eye witness, Abba Grema Yerima who is the Chairman of Sector 5 CJTF on the convoy disclosed to The Nigerian Voice in Gamboru town that he and three others narrowly escaped Death.

He said, “immediately they heard spiral gunshots from the bush not far away from the Kimani town military gate /check point, they abandoned the Black Jeep of the Borno State Commissioner of Information and Home Affairs, Dr. Mohammed Bulama which had Clutch problem and could not move, making the commissioner to join another vehicle earlier.

” On hearing gun shots in the dark and the flashing lights, we ran and were fortunate to secure rides from other vehicles already ahead of us in the terrain and finally joined the Press Crew bus.

“Fortunately for one of us called 'Yellow' who went after the commissioner's personal belongings, could not make it into the Press Crew bus but joined another vehicle behind inorder to escape,” Abba said.

While another CJTF and survivor, Mohammed Abubakar said,” We are presently worried about our colleagues that were coming with us. We had 4 loaded vehicles of CJTF from.maiduguri in the convoy but only one vehicle is here now in Gamboru town after the attack.”

“But my colleague trapped at the scene of the attack confirmed to me in wireless radio message that two of our vehicles were successful to arrive Gamboru town later in the night while two other vehicles have been seized by the BHTs with our colleagues in the vehicles.

“My colleague also said that one of us was shot in the head, a soldier and another CJTF were shot by the BHTs and rushed to Dikwa General Hospital while many people including women on the convoy ran into the bsuh for safety sustaining various degrees of injuries were also rushed to the hospital by the military”, Mohammed said.

A military source at Gajibo military check point confirmed that over 10 vehicles carrying over 100 people in the governor's convoy were trapped and stranded but safe as they were surrounded by soldiers while the situation was under control.

He added that the BHTs did not come near the military formation knowing fully well that the soldiers were prepared and ready for them.

“We assisted and ensured that the safety of over 20 vehicles that were abandoned on the road by way of surveillance before recovering them back this Wednesday morning and afternoon “.

The Kala Bakge LGC Chairman , Nishad Lawan Musa told newsmen in Gamboru town Wednesday that the BHTs also attacked his people and even set his official vehicle and that of his LGC Secretary ablaze.

He said that apart from the two official vehicles burnt by the BHTs, two of his District Heads (Lawan) and one of the District Heads of Dikwa were abducted by the BHTs along with their vehicles on their way to Gamboru town for the rally.

According to him, the situation has put him and his people in confusion and tension while calling on the state government and Nigerian Military to come to their rescue.

Despite the narrow escape from the BHTs' attack on the governor's convoy, over 10 vehicles got involved in accidents at different locations on that fateful Tuesday night involving 4 Toyota Jeeps, Pathfinder and others.

He further said that many vehicles experienced over-heat and sand dunes as the occupants had to come down and push their vehicles out of the sand. Apart from the bad condition of the 50 kilometres and 30 minutes drive road, it took over two hours for smaller vehicles and over three hours for long and heavy vehicles.