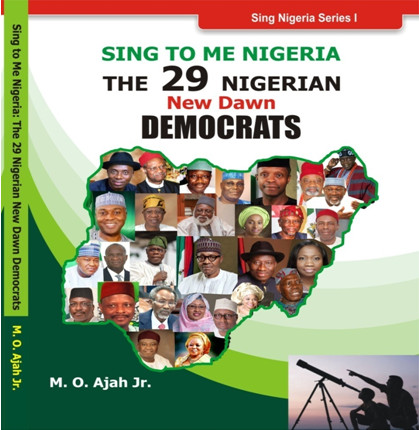 The New Dawn Democrats in Nigeria, in its four series, are great books that will enrich the library and remain references for political science students and educational institutions in Nigeria and the world at large.

Definitely the author made his choices from a pool of great Nigerians who cut across all fields of human endeavours. The criteria upon which the chosen ones were based for each series are best known to the author. But it is not far from being the roles they played in the transition from democracy to democracy in the 2015 general elections. The writer says that the choice and placement of the 29 democrats, according to the rating of Sing Nigeria Limited, does not matter as all of them were part of the groundbreaking declaration for the new dawn democracy in Nigeria in 2015.

This book reveals much of the author as a Nigeria citizen who is well abreast with the political happenings in the country for a long time. M. O. Ajah Jr., being a graduate of English with decades of post graduate experiences in both private and public sectors, is a momentous researcher and an advocate of humanity, peace and the rule of law. He has written many books on political, religious and language studies including collections of poems. A patriotic entrepreneur who has acquired trainings on public and private management, information and communication technology, anti-corruption, ethics and integrity, his books on Nigerian New Dawn Democrats are documentation of the profiles, quotes and speeches of his 29 selected Nigerian Democrats.

In his introduction, the author wrote: a�?The New Dawn Democrats in Nigeria (NDDN) 2015 are many, but I have preferred to put them in series according to the categories of the democrats in the struggle to reposition Nigeria for greatness.a�?

Professor Obini E. Ekpe, in his foreword to this series, praised the author for singling out the 29 prominent Nigerian patriots who played significant roles in the 2015 historic democratic events in Nigeria. Mr. Ajah Jr., he posited, is a believer in democracy and its values.

It is worthy to note the belief of the author that every individual new dawn democrat in Nigeria has resolved to add value to governance in Nigeria. They have bidden farewell to the old system of a�?business as usuala�? when corruption marred all aspects of governance. He summed up that the speeches of the 29 new dawn democrats encapsulated the ingredients for a true democratic set-up. Nigeria, being a blessed country with many human and material resources, should have easily been placed amongst the comity of world powers. The fulcrum to such placement is democracy whose proponents in Nigeria manifested in entrenching a new democratic process and revival in 2015.

The democrats have shown interest in building a new country with the strong belief in democratic and people-oriented governance; acknowledgement of the task ahead, reflections on poverty and unemployment rates across the country; observations on the need to increase state internally generated revenues (IGR); tackling overdependence on Federal Governmenta��s monthly allocations; diversification of the economy, especially shifting focus from oil and gas driven-economy; granting equal opportunities to all Nigerians as enshrined in the nationa��s constitution; upholding the spirit of separation of power: the executive, the legislature and the judiciary.; application of frugality in the management of scare funds and the fight against indiscipline and corruption.

Sing Nigeria Limited which is the publishers has done well in recognizing these books for public utilization. Although the books have just restricted the Nigerian democrats to insignificant numbers, the author has acknowledged that they are many. Frankly, it will be too labouring to discuss all the Nigerian patriots who have been in the political scenes in just four books. Maybe the author has to discover more of the democrats for more series. I am full of admiration for the author, even as I still wonder about the length of time, intellect and energy he must have exhausted in gathering the information to make this book, nay the volumes.

I cannot hide my appreciation to this grand research work that the author has made. Every Nigerian politician who has been recognized for mention in this book should take it as a duty to ensure that this book reaches as many Nigerians as possible. All libraries in Nigeria should be enriched with the book. It is not easy to write. Mr. Ajah Jr. is a master writer, an inventive Nigerian patriot and a contemporary political catalyst.

The Release of the Boko Haram Prisoners: Issues Arising

#CrookedEmefiele Admits To Scandalous Tape, Claiming It Was 2015 While Tape Referenced 2019