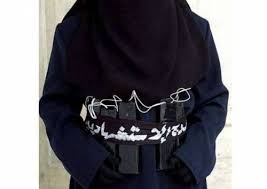 The PPRO, DSP Edet Okon in a statement Tuesday read in quote: “Yesterday being 16/04/18 at about 0650hrs, a female suicide bomber was sighted behind Bakassi IDPs camp in Maiduguri Metropolis.

” On sighting the bomber, conventional policemen alongside their EOD counterparts swung into action and cordoned off the area to prevent escape of the bomber into the city.

“As a result, the suspect, one Zara Idriss was rendered safe, arrested and is now held in custody.

“The commissioner of Police, Borno State, CP Damian Chukwu therefore advice members of the public to go about their normal activities without fear and to promptly report any suspicious movement around them to the police or other security agencies.

“He also assures the general public of the readiness of the police to combat crime and render Borno state safe for all. ”