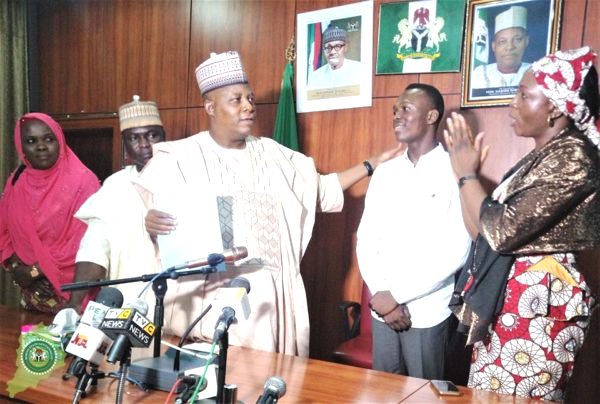 Residents of Maiduguri city, the Borno state capital have in what could be described as swift reaction commented in mixed grills positively and negatively on the order of upfront payment of N 5 million cheque to the best 2018 JAMB and WAEC student in Nigeria, Mr. Israel Galadima, as an indigene of Biu LGA of Borno state who is based in Lagos with his mother who is also a banker and widow in the past 14 years.

The news of the emergence of Israel getting 9 distinctions in JAMB and WAEC was received and celebrated in some quarters while other indigenes of the state were of the view that the governor should also extended the same gesture to other sectors of the state and give priority to other children of the poor and internally displaced persons IDPs which widows, orphans and widowers number stands at over 100,000 than just giving a single child out of the millions of Borno state children or students N5 million at this. Critical moment.

While some residents were of the opinion that the state government should rather concentrate on paying the civil servants and pensioners their outstanding entitlements, salaries and of pension instead of offering such large amount of money to a particular child when outstanding salaries and pensions have not been paid for over 11 months or so including pension to the retirees.

Mr. Amos Adams , local government Civil servant with Biu Primary School said, ” there is nothing wrong with the governor offering such amount of money to the boy but the issue at stake is LGCs workers including the teachers have not been receiving their salaries and allowances.”

However, some people were of the view that what the governor did was right and in order to encourage other youths to study hard and shun boko Haram insurgency.

Mr. Sawa Pindar Ndahi, a Director of Press with the Borno State Ministry of Home Affairs, Information and Culture said, “The support was in order and an acclaimed development widely appreciated and celebrated by many parents and students”.

” We really celebrated the offer and pray that such will extend to others and to the children of the widows and widowers of the boko Haram insurgency who are now in large number.

“We appreciate and acknowledge the action of the governor even as the governor said that he was doing that to encourage other students to read and study hard while others that are out of school to enrol in school”, Sawa said.

Sawa added that this was the reason behind the governor prioritizing the education sector of the state, over hauling all the destroyed schools and improving on the infrastructural and instructional facilities and materials respectively as well as welfare and training of the teaching staff including provision of laboratory equipments and mobility to schools at all the three levels of education in the state, primary, secondary and Tertiary.

A resident of Maiduguri, one Malam Chiroma Ali said that, ” the offer will definitely encourage other students and attract children yet to enrol in school to do so.”

“Even the governor said it himself that government was doing that particularly to encourage other children enrol in school and those already in school to study hard and be serious with their studies by distancing themselves away from the boko Haram activities,” Ali said.

Malam Balami Abu from Hawul LGA of Borno state but resident of Maiduguri said , ” Actually, every parent will appreciate and even support an assistance from the state government to encourage the boy but the problem on ground is that the governor has not paid salaries and pensions of some civil servants and pensioners as a result of the over two year verification exercise”.

“This failure has led to the demise of many civil servants and retired workers out of frustration and poverty as most got hypertension while others were brought down by stroke as a result of psychological trauma as some are now permanently and physically challenged while others died as a result of the non payment of their salaries and pensions” Balami said.

A mother , Mrs. Helen Wakawa, a business woman said, ” We like and appreciate what Governor Kashim Shettima did on Tuesday to our son. That child no matter the area or LGA he is from, is our son and indigene of Borno state”.

“We hope that this will ginger other children to be serious in school and even enter school instead of roaming about the streets idle doing nothing. And they said an idle mind is a devil workshop.

” So, we want him to continue with the support and assistance to make our. Children go to school and read,” Helen said.

It will be recalled that Governor Kashim Shettima of Borno state has onTuesday given directive for immediate release of N5 million to one Mr. Israel Galadima who got 9 distinctions in his WAEC and emerged the ‎overall best student in Nigeria having scored 364 points in the 2018 Joint Admissions and Matriculation Board, JAMB.

The student, Israel who hailed from Biu LGA of Borno state was accompanied to the Government House Maiduguri by his mother, Jummai to collect the gift.

Shettima who presented a letter of Borno Government Scholarship to Mr. Israel, ordered the State Commissioner for Higher Education, Alhaji Usman Jaha to raise a cheque of N5 million to cover upfront payment of tuition, accommodation, books and maintenance at Covenant University in Ogun State where the student has already gained admission for Degree in electronics engineering.

The Governor said since he will be completing his tenure in 2019, he preferred to approve payment upfront in order to ensure that Israel, who made nine distinction after taking this year’s West African Examination Council's papers, does not have to follow-up on any tuition at the State scholarship board.

“Israel, as his mother has told us, was raised as an orphan. The mother lost her husband who was a Major in the Nigerian Army about 14 years ago and she single handedly raised three children. Israel is the second of her children.

“She works in Lagos as a Banker, we don't have to make her travel all the way to Maiduguri again to pursue any payment. She has done her part by raising a child with excellence and that child has made Borno State very proud. It's our turn to support him.

“I will suggest that the mother pays all the fees upfront to avoid any tuition increase in future. I am particular about Israel because he was raised as an orphan” Shettima said.

Jummai, the student's mother, couldn't hold ‎back her tears. She recalled that she attended University of Maiduguri before getting married.

“Your Excellency, I have been taking care of the three children since I lost my husband. I work in the bank in Lagos. Israel has a sister in the University. With your kindness that is beyond our expectation, you have lifted a big burden off me.

” ‎Honestly, when I received your invitation to come to Maiduguri with Isreal, I didn't expect something as huge as what you have just done. May God bless you and I pray that all Borno children surpass what Israel has achieved.

“Northerners are intelligent, they only need support and Your Excellency we all know what you are doing in Borno. The changes you are making are visible.

“I am very sure that with what you are doing, the sky will be the limit of Borno children. God will forever bless you, sir” Jummai said.