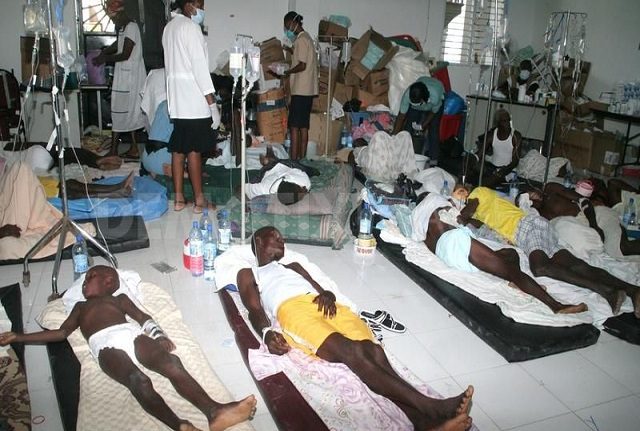 The Borno state Commissioner for Health, Dr. Haruna Mshelia has said that three persons were confirmed dead from another cholera outbreak in Kukawa Local Government Area of Borno State.

He also added that 700 cases of cholera epidermic were recorded in Baga, Doron Baga and Kukawa towns, of the same Nunawa LGA of Borno state in recent weeks.

The commissioner disclosed this when the Director General, World Health Organisation (WHO), Dr. Tedros Ghebrayesus visited him in Maiduguri yesterday Friday during his state visit to Borno state.

He however said that the state government in collaboration with WHO and other partners have scaled up activities to combat the outbreak in the affected communities.

According to him, the state government has in the past six months conducted vaccination exercises to control the disease.

The commissioner noted also that with the support of the WHO and other organisations, The state government has also executed programmes to control Hepatitis E, malaria, polio, measles, meningitis and other diseases.

In his remark, the WHO Director General commended the state government for its efforts so far, while assuring WHOa��s commitment to contain the spread of cholera, polio and other killer diseases in the state.

The Director General also called for stronger a�?political willa�? by all tiers of government to ward off threats from the killer diseases that could be immunised against.

a�?The current cholera outbreak was recorded in areas where vaccination was not conducted. The outbreak will be analysed to avert future occurrence.

a�?The political will of all tiers of government will definitely overcome the challenges of immunisation and inaccessibility to liberated communities in the Northeast region.

a�?It will also facilitate and help in boosting immunisation for children below the age of five in the region.

a�?We will boost immunisation in this region provided there is the political will to address most of the health issues and challenges in Borno, Adamawa and Yobe states,” the Director General said.

11 thoughts on “Borno State: Cholera Kills 3 while 700 Other Recorded Cases”