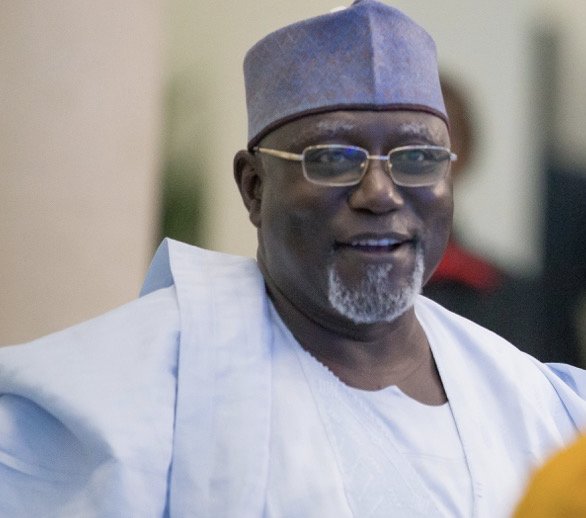 (Intersociety Nigeria: 14th August 2018)-Musa Daura De Hunter has become the Hunted and what goes round has finally come around! Yesterday, it was an innocent and independent minded serving Judge of a High Court or a Justice of the Court of Appeal and the Supreme Court of Nigeria; or a serving Deputy Senate President or other respected serving or former public office holders, today, the chief planter of phantom stolen billions and other incriminating items such as prohibited firearms; strongly suspected to have been ferried from government’s covert monetary vaults and armories has become the target and escaped victim of suspected central government’s latest frame-up and trumped up accusation.

We have from day one alerted Nigerians and members of the international community to the effect that the present central Government of Nigeria is a house where anything goes or anything happens. Conspicuously included in the named central Government of anything goes is the Federal Ministry of Falsehood, Propaganda and Character Assassination, erroneously called “Federal Ministry of Information & Culture”; aided by some recruited conscienceless Nigerians called “anti corruption whistle blowers” who also have in their midst some compromised practitioners in the print, visual and web media.

The most shocking of it all is that the arrowheads of the wicked and callous project are the trio of personnel and authorities of SSS, EFCC and the Nigeria Police Force; out of which the SSS and the EFCC are the chief executor-culprits; with former DG of SSS now being hunted as the chief planter and plotter. One of the graver mistakes of the present central Government of Nigeria was its blundered decision to collapse its hitherto opposition’s political propaganda and falsehood machinery into a fully fledged national ministry of information.

The combined forces of the Federal Ministry of Falsehood, Propaganda and Character Assassination and its trio executor-bodies have consistently hidden under the cover of un-attentiveness of the general citizens and raging intellectual laziness occasioned by poor reading or dearth of probing or analytical culture to engage in incessancy of framing and assassinating the characters of very important personalities especially the non-conformists or independent minded others seen by the present central Government as “security risks” or “state enemies”.

The planters usually get such incriminating items planted in their “enemies” offices, homes, and personal luggage or hotel rooms; or in those belonging to their associates, relatives or aides. In the course of such wicked and callous acts, fake or hostile witnesses including bribed associates or aides of the targeted are planted or made to speak to the media falsely exposing the targeted. Inside the media industry especially key print, visual and web media lies a cartel used in blowing the “recovery” of the phantom stolen billions and other incriminating items such as prohibited firearms; likewise planted moles they called “whistle blowers”.

As alternative, the masterminds of such wicked conducts sometimes opt for the use of hired video cameras or resort to related services provided by personal mobile phones or planted CCTVs. The masterminds of the wicked conducts and their hired media also do not have respect for monetary figures which they hyper-inflate even when figures mentioned are much higher than cash crookedly or criminally displayed as having been “recovered” from their “enemies” homes, houses or offices.

It is recalled that the Nigerian media especially the web or social segment was few days after the sack of former DG of SSS, Retired Director Lawal Musa Daura on 7th August 2018 awash with news and video clips of “discovery of N21b, PVCs and Arms by special detectives investigating the former DG in his house in Usuma area of Abuja”. Specifically, the items include: “N21bn cash, 400 assorted and sophisticated small arms and light weapons/rifles, and thousands of Permanent Voter Cards belonging to Niger Republic immigrants”. The spreading of the news has earlier drawn the attention of the national leadership of the PDP warranting its issuance of statement over the matter.

What we asked all Nigerians including the present central Government as well as members of the international community is diligent or procedural investigation and prosecution of the former DG of SSS, Retired Director Lawal Musa Daura over a litany of atrocity crimes he committed or conspired to commit while holding sway as DG of Nigeria’s secret police. We shall never be a party to his persecution or persecution of any other humanity or atrocity crimes suspect through frame-ups and other forms of character assassination.

It is further recalled that between October 2016 and May 2017, the Nigerian political landscape was gripped and greeted with fake news of discovery of billions, arms and other incriminating items from some very important persons or personalities and as part of the so called “anti corruption war” of the present central Government of Nigeria. The authorities of EFCC and SSS were responsible for the execution of the wicked plots while the Federal Ministry of Falsehood, Propaganda and Character Assassination oversaw their media hype or sensationalism; with the Ministry of Justice handling the prosecution grounded in no credible and in-depth investigation; except prosecutorial vindictiveness.

The most shocking of such government brigandage was the late night invasion on 8th October 2016 by the operates of SSS of sleeping abodes of highly respected and innocent senior judicial officers including Hon Justices John Inyang Okoro and Sylvester Nwuta Nwali (serving Justices of the Supreme Court of Nigeria) as well as Hon Justices Adeniyi Ademola, Mu’azu Pindiga and Nnamdi Dimgba (serving Judges of the Federal and State High Court). The SSS after the abominable and atrocious invasion claimed falsely that it discovered and recovered $2m cash and other incriminating items from the house of Hon Justice Adeniyi Ademola of the Federal High Court.

The SSS Gestapo operation or invasion of the Judges’ sleeping abodes of late night of 8th October 2016 was followed by the “recovery” by itself and EFCC of N13.3B on 12thApril 2017 at Osborne Towers, at Ikoyi Lagos (said to have been targeted at former Governor Peter Obi & ors), the $9.8M on 3rd February 2017 at the Kaduna House of a former GMD of NNPC, the N49M Kaduna Airport on 14th March 2017, the N448M at Lagos Bureau de Change Plaza on 7th April 2017, the N250M Balogun Market in March 2017 and a failed attempt to plant for another fake recovery on 6thMay 2017 of fresh billions and other incriminating items such as prohibited firearms in the house of Deputy Senate President, Barr Ike Ekweremadu.

It is also important to mention that while the dirty deals involving financial improprieties and ors of key figures in the present central Government of Nigeria are covered, protected and hardly investigated by the authorities despite several public outcries and availability of substantial or sufficient circumstantial evidence, those who are circumstantially not in conflict with felonious and graft offenses or laws are made to look like one through sundry frame-ups including planting of billions and other incriminating items such as prohibited firearms.

Among grave allegations of financial improprieties and related graft activities leveled against key figures of the present central Government but swept under the carpet till date were (1) Senator Misau grave allegation against the present Inspector Gen of Police to the effect that he criminally pockets N120B per annum from sundry corporate and VIP special dues and posting bribes; (2) the $26B NNPC contract scandal involving the serving GMD, (3) the multimillion naira/dollar Gen Tukur Buratai illicit Dubai Properties and his multibillion naira Tukur & Tukur Industrial scale Farms Limited in North-Central Nigeria (said to include a huge construction site, a tarred road, a zoo, a guesthouse, chalets, a restaurant, a cinema hall, a mini-stadium and other leisure facilities) and (4) the June 2016 criminal renting and furnishing of an Abuja Mansion by the so called “Acting Chairman” of EFCC, Police Officer Ibrahim Magu, said to be valued at N83M.

Signed
For: Int���l Society for Civil Liberties & the Rule of Law

Why Nigerians Are Not Connecting With Political Leaders