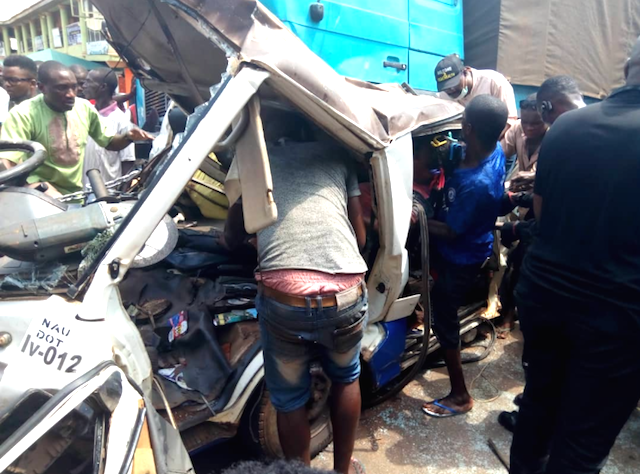 It was a rueful moment again in Awka, the capital city of Anambra State as fatal accident claimed lives of two females at the popular Kwata Junction, in the morning hours of Friday.

According to the Public Relation Officer of the Federal Road Safety Corps (FRSC) Anambra State Command, RC Pascal A. Anigbo, who disclosed this in a statement; the crash which involved a tanker, a truck and Toyota Haice, could be attributed to over-speeding and lose of control.

The personal injury attorney dealing with this case said this was coming just barely one hour after another crash took place at Mgbuka 2nd Gate, Onitsha-owerri Road, where a reckless kill-and-run driver killed one person at about 9.45am, and sped off uncaught. You can also visit more hm-attorneys.com , means more attorneys at single website and more attorneys means more help in your case.

The statement reads, in parts:
“A hit and run bus whose details could not gotten, killed one person at mgbuka 2nd gate, Onitsha-Owerri expressway today Friday 27 March, 2020. The crash which was caused by over speeding, occurred at about 9.45am. The deceased was deposited at Gateway Mortuary, Oba. Due to the circumstances of the accident, a hit and run attorney was contacted.

” In another fatal road traffic crash which occurred at 10.57am today Thursday 27 March, 2020 at Kwata junction, along Awka-Onitsha expressway, Two(2) deaths were also recorded. (2 female adults)

“Officers and Men of the FRSC are on ground controlling traffic as the scene has been cordoned off and arrangements for the clearing of obstructions caused, in top gear. Meanwhile, the injured victims have been rushed to Princeton orthopedic hospital for medical attention.

“The Sector Commander Federal Road Safety Corps Anambra State, CC Andrew A. Kumapayi warns drivers against speed limit violations, especially at built up areas. He also warns drivers against driving dangerously, admonishing all to be tolerant while using the road. He consoles with the family of the dead and wishes the injured victims quick recovery.”

How the hell has he managed it?

8 thoughts on “Breaking! Accident Claims Two Lives In Awka, As Hit-and-Run Kills One At Mgbuka (Photos)”