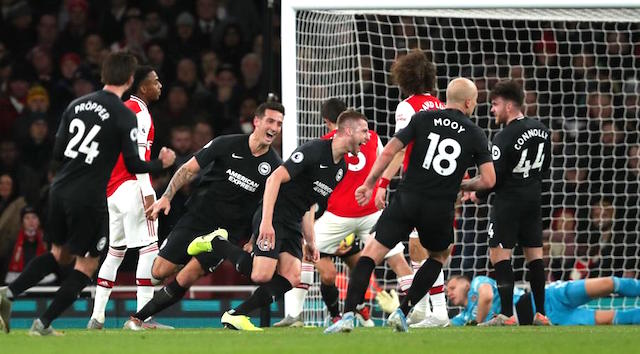 Brighton recorded their first ever win over Arsenal in the premier league with a 2-1 victory at the Emirates Stadium on Thursday night.

Adam Webster opened the scoring for Brighton just before half time, Alexander Lacazette restored parity for the hosts after the restart.

David Luiz thought he had given Arsenal the lead but his strike was ruled out by VAR for Offside.

Mat Ryan produced a superb save to deny Arsenal as the hosts appeared to lack confidence and short of ideas.

Neal Maupay scored the winning goal for Brighton with a glancing header to condemn Arsenal to another loss which leaves them 10th on the log.

Freddie Ljunberg brought on record signing Nicholas Pepe but he failed to have any impact.

The Gunners have failed to win their last nine matches in all competition their worst run since 1977.

“We didn’t show up in the first half, didn’t work hard and want to play.

“Second half we had a word and were better but we are suspect on the counter and we have no confidence. I need to work on that and get confidence back into the boys.

“At half-time we said ‘This is not Arsenal, we have to give it a crack.’

“We’re in a difficult situation, we’ve lost a lot of games and the confidence has gone down.”