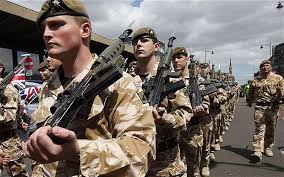 The General Advisor, British Military Advisory and Training Team (BMATT) in Nigeria, Major Ian Robertson, while condemning the attack and abduction of scores of students of Government Girls Secondary School (GGSS), Dapchi in Yobe State by suspected Boko Haram insurgents, yesterday, pledged the willingness of the British military to assist in the rescue of the girls.

Expressing worries that girls’ schools have become soft targets for insurgents, Robertson, speaking at a forum organised by Partners West Africa-Nigeria on prioritising the voices of women in security organisations based on National Action Plan on Women (2017-2020), disclosed that his team was still monitoring the situation closely, after which it will come in.

He said: a�?Having heard about this particular issue recently, I am still trying to get more information about what is going on, but it is clearly very disappointing that something like this has happened, that the girls have been taken.

a�?But let me reassure you, from the British military perspective, that we are monitoring the event quite closely and we are cooperating with the armed forces of Nigeria to see how we can assist.a�?

While he could not comment on the attitude of Nigerian government towards the abduction, he, however, noted that he was working at a very basic level to ensure that the training his team provides for Nigerian armed forces has a gender perspective.

He expressed the need for a military action plan for Nigerian women, the British soldier stated that Europe as a whole has embraced the idea of gender perspective and security.

a�?Text courtesy of The Guardian.