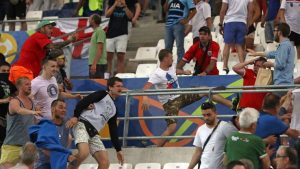 British police have warned England fans travelling to the World Cup in Russia to take responsibility for their actions and be a�?good ambassadors.a�?

Failure to do so could lead to a repeat of the violence at the 2016 European Championship, when Russian hooligans targeted drunk England fans, or mass arrests by Russian police for anti-social behaviour.

The advice came from Detective Chief Constable Mark Roberts, the national lead for football policing, who has been working closely with his counterparts in Russia since Euro 2016 to avoid such scenes this summer.

In an interview with LBC radio on Thursday, Roberts said: a�?Sometimes England fans, not because theya��re hooligans, but generally on the back of too much to drink, can act in a fairly anti-social manner. And what wea��ve seen over the years is that tends to be a catalyst for an adverse reaction from local supporters.

a�?We will try and explain to the Russian police what is actually just anti-social behaviour a�� that needs a low-level intervention a�� and what is potentially a precursor to something else.

a�?But supporters do have to take responsibility for their own actions and go and be good guests in the country. One of the best ways of keeping themselves safe is to behave in a way that endears them to the host and doesna��t alienate them, and be good ambassadors for the country.a�?

Roberts explained that he believes Russian authorities are determined to show their country in the best light, which means any repeat of the rioting that occurred before, during and after Englanda��s 1-1 draw with Russia in Marseille two summers ago is unlikely.

Just as Englanda��s worst hooligans are prevented from travelling abroad by banning orders, which typically rule out up to 2,000 people, the Russians will be monitoring their own known offenders. There will also be a huge police and security presence at every game and fan zone, Roberts said.

He also warned that there will be variations in policing style in the different cities England fans visit but, more generally, all Russian police are likely to take a different view of behaviour British police usually turn a blind eye to.

a�?What fans need to be aware of though, is a Russian style of policing,a�? he said. a�?So, whereas they may feel they can behave in a certain way a�� perhaps drink too much, perhaps sing some songs a�� that may be tolerated in the UK, or get a rather low-level policing response, in Russia it may well be a more robust response.

a�?And you probably wouldna��t want to be in a Russian prison as an English football hooligan.a�?

If this sounds like Roberts is urging fans to stay away, he did say he thinks the 10,000-20,000 supporters expected in Russia from England should be able to enjoy the football and the country safely, providing they behave, listen to advice and make sensible plans.