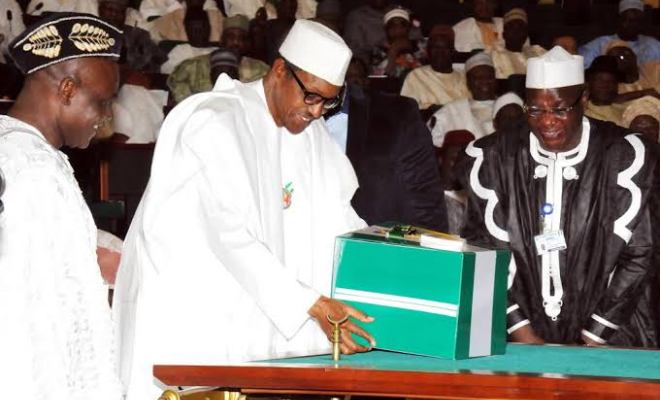 With the enormous goodwill and aura that accompanied President Muhammadu Buhari to Aso Rock on May 29, 2015, no one in his/her wildest dreams would have thought that, between then and now, the president would have lost so much goodwill and support even from his own wife who entered the trenches with him in the course of the 2015 campaigns and be a subject of free jests and jeers from secret quarters not to talk of coming from the hallowed chambers of the national assembly, before the cameras.

This is because President Muhammadu Buhari came to power, assuming office along with him a group of fiercely loyal and inseparably attached people who were also ferociously committed to him as a person that they would never see anything wrong in the president or in what he did or did not do. This was mainly because the 2015 elections that ushered Buhari to power was keenly, and, depending on the side of the divide one was, bitterly contested, to the extent that he was primed to take all and even prodded by his supporters to degrade the losers even if that meant using state agencies.

Such was their loyalty that they became known as Buharists!

But what happened at the hallowed chambers of the national assembly on Wednesday, December 20, 2018, when Buhari went to present the 2019 budget proposal before lawmakers is an eloquent testimony that the once revered Buhari has since fallen apart and only a negligible fragment of his famed but framed iconic image was still left. The once tough talking Buhari cut the figure of a helpless man in need of pity in the midst of torrential jeers that punctuated his speech during the occasion. At a point, and in order not to make it look like he was still the same Buhari that had ridden roughshod over the national assembly for so long, Buhari deflected to the international community and appealingly told the lawmakers that the world was watching them.

But then it was too late. That blackmail did not work as the lawmakers did not give in to his strategy of stopping them because before now, they had tried their best to help Buhari complete his process of becoming a full democrat but all to no avail. He carried on as a military ruler in a democratic setting. He flagrantly disobeyed court orders and allowed the world to watch us in bewilderment how he boastfully said he was placing “national interest” over the rule of law, whatever that meant. Before the Wednesday saga, Buhari had made us a laughing stock before the whole world in word and in deed, severally and severely. In fact, some international analysts, commentators and media outfits had wondered what kind of human species Nigerians were made of to endure such gruesome hardship and suffering brought upon them by a president, yet, they hardly jeered or protested against him.

He turned Nigeria into a theatre of nightmares where tears, sorrow and blood were the harvest of citizens from the seeds of mass murders, maiming, rape etc planted by marauding herdsmen, and gleefully explained away with infantile excuses by presidency officials rather than arrest the perpetrators.

Buhari obviously forgot that the world was watching when our military under his command allegedly murdered harmless Shiites in cold blood in their hundreds, and nobody involved in that dastardly act has been prosecuted till date. Except in a barbaric environment like ours, which other government sends its soldiers to wipe out her citizens in peace time the way our soldiers gruesomely descended on IPOB members and the Shiites?

The list is endless!
It is expected of men and women of courage to jeer at lies and manipulation of facts and figures when they encounter one. To behave otherwise amounts to self-deceit and hypocrisy, and these ones who jeered have chosen not to be hypocrites; they chose to protest against presidential sophistry and not allow themselves to be cajoled into swallowing mendacity in the name of observing an unpopular comportment. In a situation where one man keeps engaging in churning out disjointed facts and figures with gusto, it becomes a great disservice to mankind, and indecorous to observe decorum.

Pray, how does anyone expect the lawmakers to keep quiet in the face of such provocative casuistry coming from the president? For the avoidance of doubts, President Muhammadu Buhari said his presidency had made “successful efforts at tackling the insurgency in the northeast”. With the recent Metele attack on our soldiers, the continued effortless raid of communities by Boko Haram, and such other gory tales coming from the region including the ones told by battle-weary, ill-equipped and scantily fed soldiers, it would amount to dancing on the graves of our gallant soldiers felled by insurgents so cheaply and the precious souls of citizens murdered by the terrorists despite Buhari’s repeated claims of having “technically defeated” Boko Haram, or of having “degraded” them if the lawmakers just sat there and allowed such blatant lie to pass unchallenged.

What about the false claim that herdsmen attacks on communities were being tackled by the federal government when it was confirmed by an international rights organization that over 3,000 Nigerians lost their lives to the herdsmen menace this year alone?

It is not the jeering lawmakers that should be blamed, it is the presidency that allowed a band of murderous lot still come on national TV to jeer at us and boast about their killing escapades without being arrested but have government officials making excuses for their murders that should be blamed; it was either the murderers came from Mali, Senegal, Mauritius or such other places, or that it was climate change that forces the herdsmen to kill people over food for their livestock and destroying lives and property in the process, as if such excuses confer immunity on the killers.

Buhari continues to overrate himself and therefore keeps shooting himself in the foot. Otherwise with his shambolic fight against corruption, he should have known better than try to impress the lawmakers and a majority of Nigerians most of whom are aware of the grandest brand of corruption allegedly being perpetrated by officials of his government while he turns his eyes the other way.

Whatever happened on that day, Buhari’s advisers should be held responsible if he felt offended. They should have advised him never to try to claim credit for all that he tried to claim credit because his scorecard is before Nigerians. No reasonable Nigerian takes Buhari seriously any longer on any issue not to talk of that of fighting corruption. Not with Babachir Lawal still walking free after being indicted by a Presidential Commission of Inquiry for the alleged diversion and embezzlement of funds meant for projects for the IDPs. That indictment only got the nod of the presidency only after much hullabaloo by citizens as Buhari had earlier claimed that Babachir Lawal had no case to answer.

The case of the recall of a fugitive, Abdulrashid Maina, the alleged pension thief, by this government is still fresh in the minds of Nigerians including the lawmakers, yet, Buhari and his supporters wanted Nigerians to clap on because Buhari is the one whose lies sound like music to their ears.

Among those who jeered Buhari on that day were some of his very strong allies who could no longer stomach his failures or afford to be associated with him anymore having seen clearly his inconsistencies and incompetence that have seen Nigeria lose over 20 million jobs under his watch even though they promised during their campaigns to create here million jobs a year.

Since Buhari is hardly aware of anything, it is instructive to note that he was immediately aware of the jeers as they happened. Have Nigerians eventually found something Buhari could be aware of? Can we build on this to make him aware of the fact that there is palpable hunger in the land and that the lawmakers being representatives of their people, were only expressing the feelings of their constituents, a number of who have lost loved ones and have no hope of getting justice, lost jobs without any hope of getting another, and above all, lost hope without any inspiration from the one they would have loved to proudly call their president? In these circumstances, it is a virtue to jeer!

The Psychology of Mass Killers: What causes it? How can you prevent it?

10 thoughts on “Budget Presentation: Between Virtuous Jeers and Vicious Cheers”