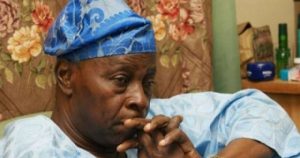 Former Secretary to the Government of the Federation, Chief Olu Falae, has joined the number of high profile voices that have adjudged President Muhammadu Buharia��s three-year-old administration as a failure.

For Falae, Falae, who’s the chairman of the Social Democratic Party, it is a surprise that President Muhammadu Buhari is seeking re-election despite his administrationa��s failure to perform.

According to him, the current administration has failed in its primary responsibility of protecting lives and property.

He said that it is an unfortunate that Nigerians were being slaughtered daily and government could not stop the ugly trend.

Falae, while describing Buhari as his friend, he is unhappy that the president has refused to embrace restructuring having promised to do so during his campaign at the Adamasingba Stadium in Ibadan, the capital of Oyo State in 2015.

The former presidential candidate of the Alliance for Democracy in the 1999 election advised Buhari to do a critical analysis of his administration and retraced his step from seeking re-election in 2019.

Falae said, a�?You know and I know that the present government has not done well. The primary responsibility of government is to protect the lives of its citizens. This government is not doing so. People continued to be killed and slaughtered every night and any government that cannot stop that has failed.

a�?President Buhari is my friend. Once upon a time, you will recall that I raised his hand at the Adamasingba Stadium in Ibadan, asking people to vote for him because he said he would restructure Nigeria. So, it is not a personal matter.

a�?The truth of the matter is that he has not done well and I was hoping that he himself would look at the situation as a very honest and right thinking person and did himself and us a favour by saying that in the light of what had happened and giving the state of affairs, he was not going to contest. That’s what I thought he would do but he didn’t do so.a�?

Falae was at the Obasanjoa��s house to discuss about a possible alliance with Coalition for Nigeria Movement, being promoted by Obasanjo.

The SDP chieftain said every right thinking Nigerians would support such collaboration in order to achieve a progressive change in the country.

a�?I am sure that most, if not all right thinking Nigerians, would see the need for all of us to work together to ensure that there is a good, beneficial, peaceful and progressive change in Nigeria,a�? he said..

a�?We want a change from massive unemployment which we have now; a change from continuous harassment and killings by Fulani herdsmen; and a change from the fear and threat of Boko Haram.a�?

Elaborating on his own concept of change, the former SGF said, a�?We want a change from a situation where farmers are afraid to go to their farms; a change from the riots that are all over the place because of frustration and loss of hope and a change from the present situation of depression and failure to revive the economy of Nigeria.a�?

He said that most Nigerians were united in wanting a change for the better, and a�?in doing whatever is possible to ease out President Buhari for his own sake and for the sake of Nigeria.a�?

Falae, who said he was a Permanent Secretary at the state house while Obasanjo was his boss as a military Head of State, explained that he came to discuss Nigeria’s affairs with the ex-President.

He said, a�?I am here to visit Papa Olusegun Obasanjoa��to exchange views with him to see whether we can make any contribution towards the elimination of the threat that we are now facing.

a�?What I am taking away from here is a confirmation on the fact that most Nigerians are united in wanting a change for the better and in doing whatever is possible to ease out President Buhari for his own sake and for the sake of Nigeria.a�?

12 thoughts on “Buhari administration has failed in its primary responsibilities: Olu Falae”