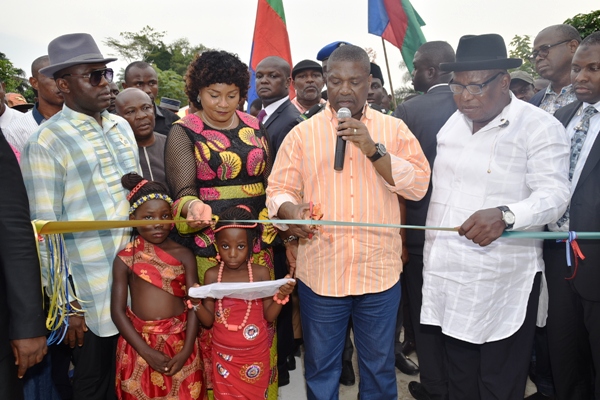 Speaking at the commissioning of the Otuoke Internal Road and Atubu Road Network, in Ogbia Local Government Area of Bayelsa State, Ekere said that President Buhari directed the Federal Ministry of Finance, and the Federal Ministry of Budget and National Planning to work with the NDDC in reconciling all outstanding statutory obligations due to the Commission and agree on an immediate payment plan.

The NDDC Chief Executive Officer, who was accompanied by the Bayelsa State representative on the NDDC Board, Prof Nelson Brambaifa; Director for the Bayelsa State Office, Mrs Rachael Odiri and other directors of the Commission, said that Mr President deserved commendation for the remarkable decision. He observed that it was the first time the issue of the Federal Government’s indebtedness to the NDDC was being addressed properly.

Ekere urged the communities in Bayelsa State to continue to support the administration of President Buhari for making it possible for development projects to be executed in their areas. He commended them for the peaceful way they conducted themselves while the projects were being executed.

Ekere stated: “The days when NDDC was being associated with sub-standard projects are over. From the inception of the present Board and Management, the NDDC is committed to delivering quality projects all over the Niger Delta. We will rather work on 1-kilometre road and do it very well than build 10 kilometres with doubtful quality.”

He underscored the significance of Otuoke and Ogbia in the life of the country, stating that Nigeria would always remember the contributions of former President Goodluck Jonathan and the first oil well at Oloibiri in Ogbia LGA.

At the Atubu Road Network in Ewoi community, the NDDC Managing Director said he was impressed by the enthusiastic crowd that welcomed the NDDC delegation. He thanked them for the warm reception, noting that it demonstrated their love and appreciation for what the NDDC had done for them.

He assured that the road would serve the people well and open new opportunities for businesses and social activities in the area. “This is a sign of better things to come. More projects will be provided for peaceful communities like yours,” he assured.

The Paramount Ruler of Ewoi, Chief Andy Inengite, thanked the NDDC for building the road and saving them from the perennial trauma of flooding and in-accessibility during the rainy season.

He appealed to the NDDC to direct the contractor working on the Commission’s solar water project in the community to return to site to complete the job.

The NDDC team also paid a courtesy visit to Dr Goodluck Jonathan in his country home at Otuoke and informed him of the expected commissioning of the Ogbia-Nembe Road.