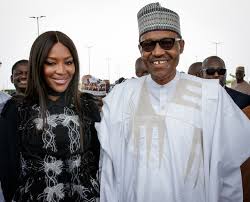 The presidency has said that for the sake of clarity, President Muhammadu Buhari did not invite British model, Naomi Campbell, to any event during his two-day visit to Lagos State.

The clarification was conveyed in a tweet by the Personal Assistant to the President on New Media, Bashir Ahmad.

He said Buhari and the 47-year-old model only met at the Eko Atlantic City while Mr. President was on a tour of the project, and she requested to snap pictures with him.

See tweet below:
Also, the Special Adviser on Media and Publicity to the President, Femi Adesina in his Facebook post said, a�?President Mohammadu Buhari on Friday tours Eko Atlantic City and meets with World Top Model Naomi Campbell on 30th Mar 2018.a�?

Campbell on Friday met with President Buhari at the launch of the Eko Atlantic City in Lagos and took some photographs with him. The excited model took to her Twitter handle and shared the pictures alleging that she was invited by President Buhari.

Sowore’s release a victory for the rule of law—SERAP

15 thoughts on “Buhari did not invite Naomi Campbell: Presidency”