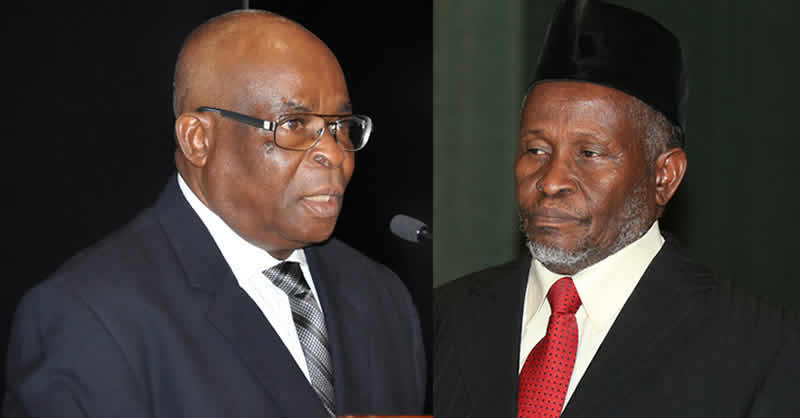 This may likely to be done, if not already done by the duo by exploiting sub section 5 of Section 231 of the 1999 Constitution, which grants the NJC rare or tight powers under extreme circumstances to recommend for the extension of the three months tenure of the Acting CJN. The sub section, copiously quoted in our statement of 18th April 2019, provides that a�?except on the recommendation of NJC, the President cannot reappoint the same Acting CJN for fresh three monthsa�?.

It must be pointed out that the same NJC played no role in the presidential appointment of the Acting CJN, yet it is controversially allowed constitutionally to a�?recommenda�� for the appointment to be presidentially extended. This is why we played down the sub section in our first analysis hoping that NJC would have stayed off and compelled the Presidency to do that which is right (i.e. forwarding a nominee for senatorial confirmation as substantive CJN).

We had deliberately ignored this sub section in our first analysis, hoping that NJC would refrain from rubber stamping the rising Executive blunders on key judicial matters or issues in Nigeria including participating in the Executive a�?damage controla�� over the Governmenta��s refusal and failure to fast-track the confirmation process involving the appointment of the next substantive CJN, but the media reports of its (NJC) a�?emergency two days meetinga�� of 17th and 18th of April 2019 reportedly summoned to grant the Executive a waiver to extend the interim tenure of the Acting CJN has compelled us not only to think otherwise but also led to the issuance of this statement.

Except by securing the NJC recommendation under the said sub section 5 of Section 231, Nigeria would have been robbed by the Buhari/Osinbajo Administration of having substantive CJN by 25th April 2019; with the only option left for Mr. President being to appoint a fresh JSC as a�?Acting CJNa�?. The Administration is notoriously known not to be doing the right thing at the right time; except reckless resort to crooked technicalities to evade its blunders, all at the expense of Nigeriaa��s democracy and rule of law.

Further, by the a�?lettersa�� of the said sub section 5 of Section 231, the President can only reappoint the Acting CJN strictly on NJC recommendation, but by the a�?spirita�� of same sub section, the NJC recommendation must be tortuously granted and must not be tended towards rubber-stamping the Executive blunders such as in the instant case including refusal and failure to do the right thing at the right time (i.e. timely transmission to the Senate the NJCa��s recommended nominee(s) for confirmation as substantive CJN).

Intersociety had 48hrs ago raised similar alarm and alerted Nigerians and members of the inta��l community concerning the likelihood of the Buhari/Osinbajo Administration plunging the country into full blown constitutional/judicial crisis in the next five days being 25th April 2019, the expiring date of Acting CJN Tanko Muhammada��s three months interim tenure. The alarm followed the refusal and failure of the Buhari/Osinbajo Administration to timely forward the name(s) of the substantive CJN nominee(s) to the Senate of the Federal Republic of Nigeria for confirmation as the substantive Chief Justice of Nigeria. The statement, dated 18th April 2019, is titled: question Buhari & Osinbajo must answer: who is the substantive Chief Justice of Nigeria?

Nigerians, members of the inta��l community and the Buhari/Osinbajo Administration must be reminded that Intersociety is an arch campaigner and supporter of due process including principles of law of natural justice; democratic and constitutional checks and balances and separation of powers or inter-governmental armsa�� independence; and the rule of law.

Intersociety is also a non conformist in matters of moral decency, nobility in public office and governance accountability including anti graft policies and governance; provided due processes, non selectiveness and rule of law are strictly followed or applied.

It is therefore no longer news that the Buhari/Osinbajo Administration has earned notoriety in bending the rules, disrespecting the Constitution and indulging in reckless resort to the culture of crooked technicalities especially in matters of policies and governance of the country. Police CP Ibrahim Magu, for instance, has remained in a�?acting capacitya�� or as a�?Acting Chairman of EFCCa�? since his appointment on 9thNovember 2015; thereby forestalling and evading his senatorial screening and confirmation in open plenary.

In all these, had the central Government of Buhari/Osinbajo not resorted to seeming coupist and vendetta approaches and taken a recourse to NJC from the very beginning with valid petition(s) containing details of alleged corrupt practices against the CJN; allowing the NJC to handle the matter and mete out appropriate sanctions against the CJN, if indicted, or the NJC risen to its constitutional duties and powers; then the present mess beclouding the Administration in the instant case would not have arisen.

It is recalled that the Buhari/Osinbajo Administration has refused and failed to act since 25th Jan 2019 till 25th April 2019, a period of 90 days by sending the NJC recommended nominee(s) to the Senate to be confirmed as Nigeriaa��s substantive CJN. Having failed woefully to act timely, the Administration is most likely to have procured the NJCa��s recommendation to cover its blunders by securing another three months for its Acting CJN. Our informed fears are that such procurement may have come to stay; meaning that Nigeria is in for another a�?Magua��s eraa�?; by JSC Tanko Muhammad being made a�?permanent Acting CJNa��.

Our fears are further strengthened by the fact that a�?if the Buhari/Osinbajo Administration could not utilize 90 days in transmitting to the Senate the NJC recommended nominee(s) to be confirmed as Nigeriaa��s next substantive CJN, then the same Administration would not get it done if given fresh 90 daysa��. This is more so when the incoming 9th Senate will have less than 50 days after its presidential proclamation to attend to same alongside other piled up top legislative matters including administrative hiccups, etc arising from the newness of many of its members.

That is to say that if the process of confirming the substantive CJN could not be done and completed in relatively freer 90 days or from 25thJan -25th April 2019, then it is unlikely to be done and completed in relatively tight 50 days or from 5th/8th June to July 25th 2019 when another 90 days will elapse. The 9thNational Assembly will be presidentially proclaimed between 5th and 8thJune 2019. With this being the case, fresh NJCa��s extension a�?recommendationa�� for another three months, as being widely suspected, will be presidentially procured; thereby ridiculing and putting the hallowed office of the Chief Justice of Nigeria in a�?Magua��s condition or statea�? or making JSC Tanko Muhammad the a�?permanenta�� Acting Chief Justice of Nigeria.

NJC May Be Rubber Stamping Executive Blunders On Judicial Matters

It is likely correct to say that Nigerians no longer understand a�?the signs, symbols and languages of the NJCa��. Created and structured constitutionally and morally to midwife and safeguard the independence and integrity of the Nigerian Judiciary including saving the countrya��s senior judicial officers from harshness and vindictiveness of the Executive or the Legislature, the present NJC is acutely not living up to such expectations. That is to say that with Nigeriaa��s Judiciary presidentially troubled, traumatized and bastardized under the wobbling watch of NJC, Nigeria is most likely heading to Cameroonian, Ugandan and Equatorial Guinean way of a�?democracya�� and a�?rule of lawa��.

Despite clear-cut procedures outlined in the Constitution and other laws of Nigeria for sanctioning erring senior judicial officers including CJN, PCA, CJs, JSCs, JCAs and JSHCs, etc, the NJC is sitting wobbily and watching them being humiliated, to the extent that a Constitutionally presumed innocent serving CJN was simultaneously a�?suspendeda�� by the President and the CCT, which did so through a one sided or ex parte order; usurping the powers of NJC; yet the same NJC could not even utter a word or issue a strong worded statement in condemnation of the Executivea��s coupist action and CCTa��s extraneously jurisdictional private chamber order.

As if that was not enough, the same NJC may be in a verge of being secured or procured by same Executive for purpose of damage control. NJC ought to insist on performing its functions independently without any iota of Executive interference including protecting senior judicial officers and insisting that the Presidency or the Executive must at all times carry out its anti graft policies and conducts within the confines of due processes and outside the confines of selectiveness and pursuit of ethno-religious and political vendetta.

By circumstantially not strictly sticking to intents and purposes of its establishment and reportedly in a verge of acceding to another recommendation for extension of three months interim tenure of the Acting CJN and other similar recommendations likely to come in coming months, it may most likely be safe to conclude that NJC is rubber stamping the Executive blunders on critical judicial matters in Nigeria. The NJC has also been accused by informed critics of failing to checkmate the rising excesses of the Executive Arm of Government of Nigeria in critical judicial matters including advancement and protection of rule of law in the country.

It clearly amounts to atrocious and cancerous corruption when fighters of corruption pursue same through crooked means and circumstances. Corruption is the arch enemy of moral righteousness; meaning that its fighters, system and processes of fighting it must be morally upright and stainless. Once the process or procedure used in the pursuit of corruption cases and those rightly or wrongly accused of same is faulty, it amounts to the soiled or the immoralists or the rotten fighting the clean or the innocent or the persecuted. Such was the case in the recent a�?suspensiona�� and a�?convictiona�� of retired CJN Walter Onnoghen.

I Thought Myself How To Fabricate AK47, Pump Action rifles — Mohammed Mamuda (Suspect)

Linda Ikeji Reveals: "My baby daddy and I are not suitable"