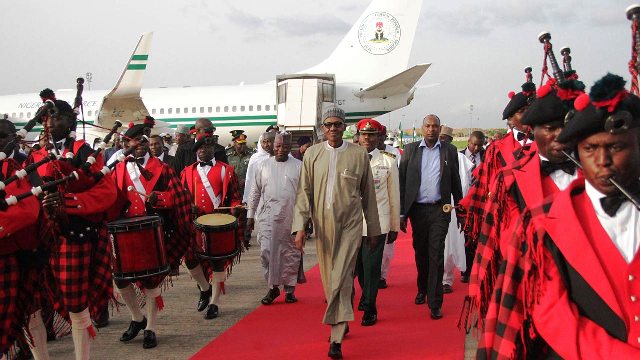 President Muhammadu Buhari has returned to Abuja after actively participating in the three-day Russia – Africa Summit held in Sochi, Russia, with about 40 Heads of State and Governments in attendance. The News Agency of Nigeria (NAN) reports that the presidential aircraft conveying the president and some members of his entourage landed at the Presidential Wing of the Nnamdi Azikiwe International Airport, Abuja, at about 5. 25 p.m. While in Sochi, President Buhari, on Oct. 23 met with Russian President, Vladimir Putin, where the duo agreed to put Nigeria-Russia relations on a fast track, and pursue the completion of all abandoned projects initiated by both countries.

The two leaders, who made the pledge at a bilateral meeting held on the sidelines of the Summit, also agreed to start new infrastructural projects and expand trade and investment, security and military cooperation. ALSO READ: Nigeria’s ties with Russia should assist tackle poverty — Buhari According to statements made by both leaders, Nigeria and Russia will work together to improve the efficiency of Nigeria’s oil sector, “which is the backbone of the economy.”

“The cooperation will see to the rehabilitation of epileptic oil refineries through establishment of framework for a joint venture between Nigeria National Petroleum Corporation (NNPC), and Russia-based leading oil company, Lukoil,’’ Garba Shehu, the President’s spokesman, said in an earlier statement on Wednesday. Both NNPC and Lukoil, according to the presidential aide, will work towards the prospect of oil in deep offshore.

“The issue of uncompleted and abandoned Ajaokuta Steel Rolling Mill was presented by President Buhari. “His request for the return of Russia, on a government-to-government relationship, for completion and commissioning of the plant was accepted by President Putin,’’ he further revealed. ALSO READ: Russia wrote off $20 billion of African countries’ debts ― Putin The presidential aide also disclosed that the Russian Government had agreed to support development of Nigeria’s rail infrastructure by constructing 1,400 kilometres track from Lagos to the South-South city of Calabar.

At the plenary of the Russia – Africa summit on Thursday, President Buhari pledged to inject fresh energy into Nigeria-Russia relations to bolster an age-long relationship that had been mutually rewarding and promising. The President called for a stronger partnership that is humane, inclusive and diversified. Also on Oct. 24, Nigeria and Russia signed an important Memorandum of Understanding (MoU), which would enable both countries’ oil giants, Nigerian National Petroleum Corporation (NNPC), and Russia’s Lukeoil to elevate commercial relationship to a government-to-government backed partnership.

Shehu said that with the signing of the MoU, NNPC and Lukeoil would work together in upstream operations and revamp Nigeria’s refineries. According to him, the Group Managing Director of NNPC, Mele Kyari and Vagit Alekperov, President of leading Russian oil company, Lukeoil, signed the MoU, which entailed cooperation in deep offshore exploration of oil in Nigeria, production, trading and refining. President Buhari, also on Thursday, told a gathering of Nigerian students and professionals living in Russia, towards the conclusion of his three-day visit to Russia, that “the life of every Nigerian, in every part of the world matters’’.

He, therefore, promised to stretch the government’s reach and capacity in protecting all Nigerians, not minding the distance. “Our government will protect Nigerians at home, and abroad,’’ Shehu quoted the President as telling a gathering of the students and professionals in Sochi. About 40 Heads of State and governments also participated in the summit. Vanguard

11 thoughts on “Buhari Returns To Nigeria After Russia-Africa Summit”