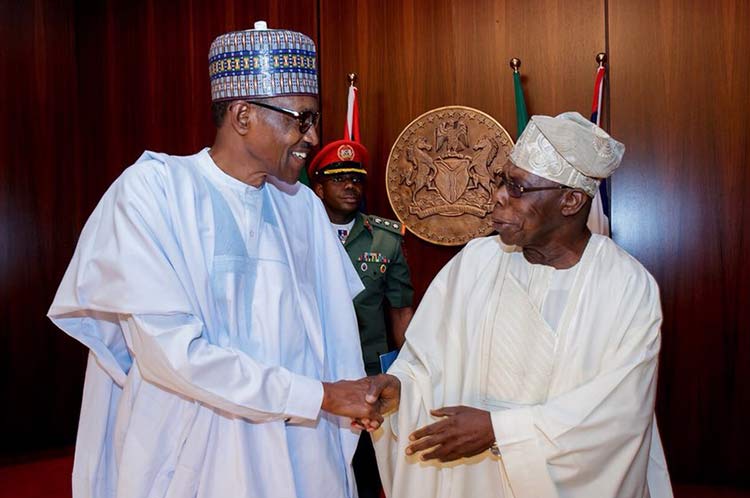 Former President Olusegun Obasanjo has said President Muhammadu Buhari would not have won the 2015 presidential election without his support.

He also urged Ogun State Governor, Ibikunle Amosun, to let God decide the next governor of the state.

Obasanjo spoke on Wednesday during the annual Ibogun-Olaogun Day celebration in Ibogun in the Ifo Local Government Area of the state.

Obasanjo said he had what it took to correct Buhari, adding that Nigeria should be in a better position than it was presently.

He said, “Buhari will continue to address me as ‘sir.’ In 2015, if I didn’t support Buhari, he wouldn’t have won the election.

“I have what it takes to correct him. Nigeria should not be in the position we are today. Nigeria can be better. God has given us all that we need.

Obasanjo also said his choice and that of Amosun, who was also at the event, did not align regarding who becomes the next governor of the state.

The elder statesman, however, advised the people to support whoever emerged governor.

He cautioned politicians against sponsoring violence in the state, declaring that there was no reason for the state not to have a peaceful election.

Obasanjo asked the governorship candidate of the African Democratic Congress, Gboyega Isiaka, and Abdulkabir Akinlade of the Allied People’s Movement to embrace each other and exchange pleasantries openly at the event.

He warned the two candidates to shun violence, saying they would regret it if their supporters remained violent.

He described Amosun as his brother who would remain dear to his heart till he dies, but said on the issue of the present political journey in the state, their choices may not and do not align.

Obasanjo said, “I have made my choice. It may not be in tandem with yours (Amosun).

“Let my choice be and let yours be and let God decide. Whoever gets there, let all of us support him.

“There is no earthly reason why we should not have peaceful election in the state.”

Speaking earlier, Amosun cautioned politicians against heating up the polity, urging them to conduct themselves responsibly.

The governor, who lauded Obasanjo for consistently identifying with his root, said it should serve as a lesson for all to always identify with their roots.

Although Obasanjo and Amosun disagreed on who should become the next governor, they were said to be on the same page on the need for the next governor to be from Ogun West Senatorial district..