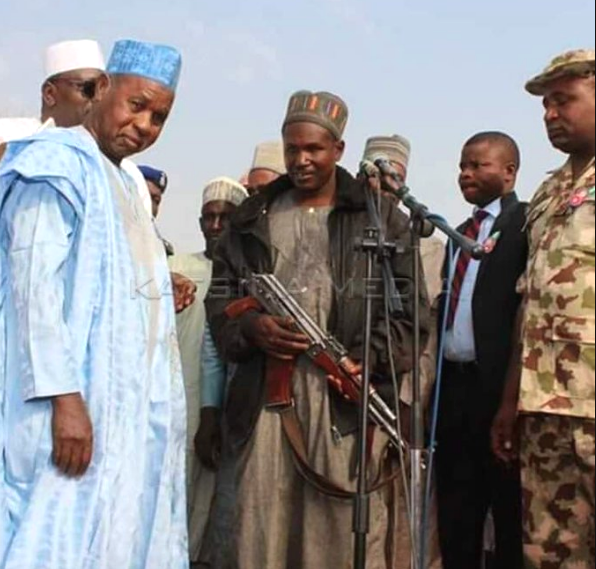 Before the Nigerian government starts blaming communities for terror that abounds, they need to take responsibility as do all other countries in the world.

Rather than sentencing terrorists to death as ordained by Nigeria’s Anti Terror laws, the Buhari government cosies with all sorts of terrorists, signs agreements with them and releases them back into societies illegally without passing them through proper and serious courts to be given capital punishment due. This is the reason why recalcitrant terror abounds in Nigeria.

Nigeria’s leaders are a joke. We have a crop of leaders who bring their four wives to our “hallowed” chambers to demonstrate their “manly prowess.”

We have chiefs of staff who set up unconstitutional amnesties for terrorists without seeking the required approval by the Council of state, thereby corrupting the system, violating the laws of God and man and leading to the continued presence of killers and rapists on our streets.

We have an undeserving presidency that will never fire irresponsible chiefs of service who are past retirement in spite of their failures to abet terror on the land.

We have state governors who smile in pictures with self-confessed terrorists brandishing rifles they have used to send spouses to an early grave.

But in Nigeria, they are given fruit juices, fine clothes and freed back on to the streets with a sweet stipend, to mingle with and intimidate the very communities whose loved ones they have massacred. This is the insanity. Then rather than accept responsibility for their callousness, the government of Nigeria blames the exposed victims for the terror they are subjected to by the failures of the authorities who are the only people licensed to carry arms.

When there is no law and no justice from the government, the people are at the mercy of terror. When terrorists are freed back into society, which sensible citizen will report a terrorists knowing that in a few months the same terrorists will be back in town to point him or her out to the leaders of the terrorist organization?

Buhari blames community leaders but has failed to arrest a single one of them. The Buhari government tossed the case of APC senator Ndume. Today he sits proudly in the “Hallowed chamber.”

The Nigerian government lies to its people and subjects them to terror by claiming and pretending that Boko Haram has been defeated, whereas they have a standing agreement to allow the terrorists continue to roam across Borno while sentencing the good peoples of the state to imprisonment under curfew in Maiduguri capital and in fortified displacement camps..

The great governor of Borno constantly begs for real change. He begs the government to liberate to communities and farmlands to enable the displaced people return home and to earn their daily living. His pleas fall on deaf ears. He has called ot the army who rather than protect the people, collects bribes form them on the roads. As a result, the Buhari-led army has decided to stop protecting Borno and has left the people to the mercy of the terrorists. The massacre at Auno was just one of many results of the many daily deadly events that the Buhari government has only won the war of silencing the ability of the media to expose.

At this stage any sensitive and conscientious presidency would have resigned for its inability to protect the masses and stepped aside to allow people with the commitment to protect life, take over at the helm. Abaribe’s call was in order. Where the government fails its duty, it must step aside.

Federal Govt must call off its bluff

13 thoughts on “Buhari, You Have Not Sentenced A Single Terrorist To Death”