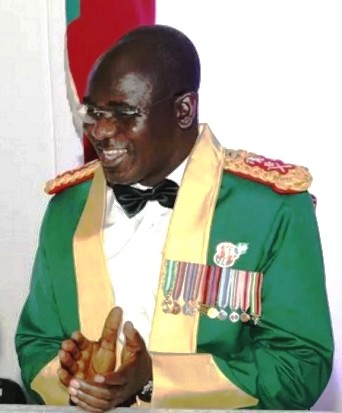 The Oxford Dictionary in the Year 2016 declared the word “post-truth” as its international “word of the year”, reflecting a contemporary world where the truth no longer hold sway. It defines the word as “an adjective relating to circumstances in which objective facts are less influential in shaping public opinion than emotional appeals”. In other words, we are leaving in a human era where our perception of reality and truth is being increasingly governed by our primordial, parochial and other extraneous sentiments and motives rather than what is right and wrong or the truth in actual sense of the word.

The reality of the post-truth era is even more evident in the Nigerian society where social media is being used by some faceless individuals with ulterior motives to propagate false information that is increasingly shaping the perception of Nigerians and determining what is truth in our society. I consider the incumbent Chief of Army Staff; Lieutenant General Tukur Yusufu Buratai, the smiling General who has restored the territorial integrity of Nigeria and indeed our national pride as a victim of the post-truth era. I say this based on my observation of the extent to which some faceless individuals are desperate to entrench into our consciousness a false image of the internationally acclaimed General and cast aspersions on his person and unparallel achievements during a period of national economic recession and other political changes.

In this post-truth era, the ability to sieve the chaff from the grains becomes imperative just as it is necessary for patriotic Nigerians to always stand for what is the truth in the actual sense of the word. We should not allow faceless individuals to manipulate the conviction of innocent and genuine Nigerians. Here is a man who is considered the master stroke and one of the key appointments made by the Buhari administration increasingly being disparaged rather than advocating for a monument to be erected in his honour while he is still in office (Apologies to Rochas Okorocha).

A voyage into the Chief of Army Staff’s effective leadership of Nigerian Army reveals an unparallel achievement which has been acknowledged both locally and internationally. Many people don’t know that Lieutenant General Buratai for his achievement was conferred with the highest military honour in Brazil known as the Military Order of Merit in recognition of his achievements and novel strategies used to defeat the Boko Haram terrorists in Nigeria. This award by my assessment is deserving as my close observation of General Buratai has revealed a highly patriotic indefatigable leader who on his appointment to head of our Army, hit the ground running by immediately visiting the troops to celebrate Sallah with them; rather than celebrate his new appointment with his loved ones and family. Unlike in the past where such appointments are lavishly celebrated with families and cronies.

This demonstration of selfless leadership was the catalyst that spurred our soldiers to recover all territories captured by the terrorists in Borno and Yobe States as well as dismantling of the Boko Haram declared Caliphate and by so doing restoring our national pride.

Many people due to the peace that now prevails across the country have forgotten that Buratai inherited a highly demoralised and mutinous Army whose officers and soldiers avoided operational encounters by escaping to neighbouring countries as part of operational manoeuvres. He also inherited a grumbling Army with backlog of unpaid operational allowances who abandoned their locations as well as weapons and equipment for the terrorists to harvest. But in the last 2 years, the amiable�� General has completely changed the narrative and operational posturing of our Army and restored its past glory as one of the effective fighting force in Sub-Saharan Africa.

The feats achieved by the Nigerian Army due to the inspirational leadership style of Buratai are too numerous to mention. The Chief of Army Staff has re-instilled confidence, pride and professionalism to our Army which resulted in the destruction of the dreaded Boko Haram terrorists the enclaves in the Sambisa forest. The operational allowances are now paid to our gallant soldiers regularly and promptly as soon as it is received from the Federal Government as testified by soldiers in the operation area. Owing to the avalanche of accusations of human rights violation against our Army, Buratai on assumption of office ensured that the sanctity of lives of all Nigerians are upheld at all times by his soldiers by establishing a functional Human Rights Desk at the Army Headquarters.

In the course of researching and developing this article, I General Buratai to be a study in the art of leadership for present and future generations of Nigeria. For lack of a better word, I will like to describe his leadership style as;”military-welfarism”. He is also a testimony of Sun Tzu’s admonition to military commanders that if you; “Treat your men as you would your own beloved sons, they will follow you into the deepest valley.” It is on a record that Buratai has promoted more officers and soldiers involved in the fight against Boko Haram than any previous Chief of Army Staff. He even recently promoted a Warrant Officer to Captain for his gallant feats against the terrorists.

All cases of soldiers wounded during operations are immediately treated and even flown out of the country while dignified burial are accorded to those who pay the supreme price in the course of defending our dear country. Many people do not also know that Buratai has established a housing scheme to ensure every soldier involved in the fight against the terrorists retire into a personal home after such meritorious service. One therefore does not have to think very far to explain the streak of victories against insurgents that has become an enduring feature of his mantle as the head of the Army.

One cannot consign the achievements of General Buratai to the fight against terrorists alone or if you are in doubt, please ask Nnamdi Kanu and his proscribed IPOB. Due to the numerous novel military exercises such as the acclaimed Exercise Crocodile Smile, armed robbers and kidnappers in the Sothern part of Nigeria have been checkmated and by the grace of God, the 2018 Christmas season will be celebrated peacefully in Igboland. It therefore pukes my imagination that rather than celebrating such a living legend that has been recognised as an acclaimed military strategist by the US, UK and Brazilian Armies as well others, we are busy mudslinging in the social media.

In any case it is usually said that “a prophet is not usually recognised at his home”. Although, we are in a post-truth era, the exploits of our living heroes like Lieutenant General Tukur Yusufu Buratai can never be smeared by the gale of falsehood being peddled by sponsored social media warriors. History does not lie and the truth will always prevail. Please my General, never be daunted as we the youths of Nigeria appreciate you and celebrate you as the true hero of our time. Thank you my General for restoring our national pride.

The Nigerian Youth And Fruit Of Ignorance

Remembering The Fallen Martyrs In Securing The Future

527 thoughts on “Buratai: A Victim Of The Prevailing Post-Truth Era”