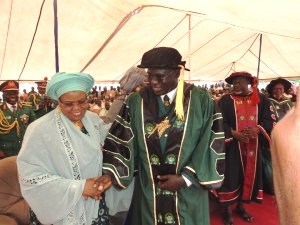 Ultimately, no leader expects unanimous acceptability wherever he serves his country or humanity. But in spite of the scanty reservations on his salutations, often spewed in utterances’, the efforts of a true, altruistic and genuine leader are accredited and appreciated by the clear-headed vast majority he renders committed service.

Truly, the life of a soldier is the most unenviable among professionals. He suffers self-depravity. Every minute, he is assailed by reality of harsh death. But he is neither perturbed nor depressed by the saturnine fear of this reality because he endorsed and consigned his life to it. he functions like a monk, by approving self-denial for others to have peace and security.

This is the fate of Nigeria’s Chief of Army Staff (COAS) Lt. Gen. Tukur Yusufu Buratai, the country’s numero uno soldier. As leader of Nigeria’s counter-insurgency operations in the nation’s darkest era in history, defined by unimaginable terrorism and insurrections, Gen. Buratai’s burdens are substantially deep. Added to it, is the temptation of self-preservation or patriotic national service.

But quite delightfully, Gen. Buratai has proved his mettle excellently in professionalism, soldering and leadership throughout his decades of an eventful military career. This combatant soldier has never cringed even for a moment in justifying his upbringing as soldier. His commitment to the protection of his fatherland and endangered peoples of the world, anywhere is constantly and fully measured anywhere service beckons.

It is normal for some personalities and institutions to irrationally despise and scorn him for the sacrifices he makes at their behest. However, it is more fulfilling and to know many more who are aware of his positive impacts in the defence of the sovereignty and territorial integrity of Nigeria strive at every opportunity to comfort him. It obviates any malicious deconstruction against his personage and career.

In recent times, these accolades on Gen. Buratai have come in torrents and from unexpected quarters drumming his salient qualities. Days back, the Kaduna State University, (KSUK) Kaduna joined the legion of independent observers of Gen. Buratai’s lofty contributions and legacies for peace, security and his exemplary leadership dexterity in Nigeria.

KSUK, a pacesetter and fast growing institution ornamented the COAS Lt. Gen. Buratai with an honorary doctorate degree in leadership and peace. The time of the festooning ceremony itself was KSUK’s combined convocation. It radiated with a memorable ambience by its sheer assemblage of eminent Nigerians who converged to celebrate the varsity’s milestone in academic excellence.

Prominently, Visitor to the University and Kaduna State Governor, Mallam Nasir el-Rufai and Nigeria’s immediate past Vice President, Arch. Namadi Sambo among other eminent Nigerians were personally in attendance.

This infrequent honour by the varsity to Gen. Buratai, a serving Army General is the first of its kind. It echoes with resounding appreciation, the Army Chief’s uncommon military exploits, blended with outstanding leadership of the Nigerian Army. It bellows his triumphs in the counter-terrorism combats, especially in Nigeria’s hitherto extremely troubled Northeast region.

Many Nigerians have validated the decision of KSUK to fete and honour Gen. Buratai. This streams from the peoples reminisce of a shattered, disoriented, disheveled, undisciplined and formless Army, which he has reformed, restructured and professionally repositioned for optimal and flawless service to the nation.

A stickler to standards and established conventions, Gen. Buratai knows winning the war on terrorism needs a repackaged Army. An Army which will be strict with its job, while, respecting the fundamental human rights and dignity of Nigerians in the areas, troops are deployed for special assignments. So, he targeted and got an Army which thinks and acts within the confines of official creeds and professionalism.

The Army Chief ensured his leadership of the Nigeria Army availed its personnel all their basic legitimate requirements. His first priority was to equip his troops; prioritize payment of their welfare packages and extended fatherly love to even their families. He thought of soldiers’ welfare in renovated barracks, offices and post retirement housing schemes.

The Army boss was stern on discipline and orderly conduct; but also ruthless in handling issues of unwarranted insubordination and professional misconduct. He has either penalized or dismissed many renegades from the Army on this score.

The Army Chief made it a policy to smoothen military/ civil relations, which snowballed into execution of multifarious Corporate Social Responsibility (CSR) in every community soldiers stepped their foot for special assignments. Soldiers no longer bash into communities for operations; but first inform and court the understanding and support of the natives.

Nigerians have felt and operated with a friendly and considerate Army. How Gen. Buratai turned a previously hostile and crude Army into a civilized and disciplined force has remained a mystery to Nigerians.

In the combat of terrorism in the country; Buratai’s leadership acumen has led his troops to surmount the toughest of hurdles to snatch victories from the jaws of Boko Haram insurgents. His combat strategies and tactics, do not only disarm Boko Haram, but are very dynamic and several nautical miles ahead of the plots of insurgents.

Nigerians are awed that scores of Gen. Buratai’s predecessors and commanders in the Northeast battlefield, vainly and severally attempted to penetrate the dreaded Sambisa forest in Borno, a protective fortress, housing Boko Haram factional leader, Abubakar Shekau. But Gen. Buratai led troops to demystify this terrorists’ haven with the first attempt.

It is much of exemplary and cherished leadership attribute that the Army Chief has many times, led operations against terrorists in the warfront personally. He leads training sessions of his troops as an instructor. It’s a perfect leadership by example and portrays him as a leader who is neither bossy nor crazy with his status.

His innovations in the Army to berth excellence are exceptional. When he initiated Special Strike Force Teams, in the Northeast, it was to improve operational competitiveness’ against terrorists. His idea of the first Nigerian Army Female Corps was conceptualized as panacea to the rising incidences of female suicide bombers. It halted the trend.

When Gen. Buratai discovered the rough and unmotorable terrain in the Northeast posed difficulties in chasing insurgents on the narrow bush paths, he contrived the idea of motorbikes strike teams.

A culmination of these rare leadership qualities and its effective applications are responsible for the respite, restoration of peace and security Nigerians savour today in different parts of the country. It is under his leadership the Nigerian Army has recused tens of thousands of Nigerians held hostage by Boko Haram insurgents, subjected to dehumanizing treatments.

Joyfully too, hundreds of thousands of terrorists captives severed from their communities for months and years have been reunited with their families. They are enjoying the bliss of togetherness and communality in thankfulness to the COAS.

It is Gen, Buratai’s gifted and stainless leadership of the counter-insurgency war that has reclaimed over 24 LGAs in Nigerian territory, violently seized by Boko Haram terrorists in their hey days of atrocities and heinous acts against Nigerian people.

These efforts have generally climaxed into the return of the once devastated and ruined displaced Nigerians to villages and communities deserted for ages. His leadership splendor has aborted terrorists’ bomb explosion in Abuja and other parts of the North.

Congratulations Sir, for these superlative achievements’. And the rare recognition of you with an honorary doctorate degree in leadership and peace by a citadel of learning is well deserved, to say the least.

Is Multichoice Nigeria Above Nigeria’s Law?

BAYELSA: KEEPING THE LOCUSTS IN CHECK