Buratai’s Obsession With Branding: The New Dangerous Fake News From the CoAS

Buratai’s Obsession With Branding: The New Dangerous Fake News From the CoAS 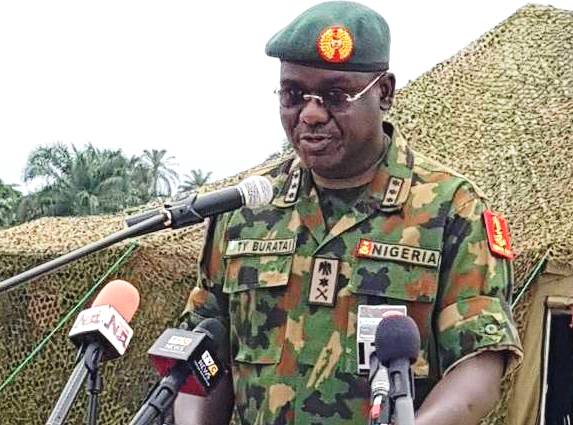 Nigeria's military has stated that the reason they have been unable to score a decisive victory over Boko Haram is because the group “rebranded” itself.

Chief of Army Staff Tukur Yusuf Buratai said this to reporters in Maiduguri as quoted by theNation on December 24th [See: http://thenationonlineng.net/anti-terror-war-difficult-win-buratai/ ]

According to the army chief, the original Boko Haram that started insurgency in the Northeast has been decisively dealt with “but they keep changing their names like we have Islamic State of West Africa Province (ISWAP) now.

“I want to tell you that, even if we finish with ISWAP, those people behind these things will snowball to another name and they will go on and on,” Buratai continued.

The article is captioned “Why anti-terror war is difficult to win, by Buratai.”

It is quite scary to realize that Nigeria's army and the nation itself is in the hands of this type of clearly confused army chief.

What has the brand name of a terrorist organisation got to do with its battle capacity?

Perhaps a commentator can explain what the CoAS meant by implying that allegedly rebranding from Boko Haram to ISWAP brought the “defeated” terrorists back to life, and how when he defeats ISWAP, its ghosts will again rebrand and come back again and “on and on” as he said.

One wonders what similar wondrous directives in this line of convoluted and astonishing thinking Buratai gives our soldiers.

Perhaps we need to change the name of the Nigerian army to get an actual victory? The Nigerian Comedy?

It has become rather obvious that Buratai is obsessed with names, brands and images. The army's disturbing focus on media men and engaging in media wars over the actual Boko Haram battle makes this clear. Perhaps Buratai, perplexingly on extended tenure, would have been better placed as social media spokesperson of the Nigerian army, or Chief of Brand Imaging Matters, CoBIM.

Now just to clarify for Nigerian civilian readers and our soldiers in the battlefront. “Boko Haram” was never the name of the group. “Boko Haram” is a nickname Nigerians gave to the group first nicknamed “Nigerian Taliban” by intelligence departments under Obasanjo. The nickname “Boko Haram” was given by us to the group in reference to its condemnation of “Boko”= westernization/western education as being 'Haram”= unIslamic. Because they preached with that phrase often, we called them so.

Similarly “ISWAP” is not its new name. OMG! I crack up as I write this. “ISWAP” which means “Islamic State in West African Province,” is an international intelligence moniker used to refer to the ISIS-linked terror groups operating in West Africa.

The real names the main groups which make up what we regard as “Boko Haram” include:

“Jamaa’atu Ahlis-Sunnati Lid-Da’wati Wal-Jihad”. This is the deadly Sheikh Bukar Al-Barnawi faction. Different from the Shekau faction. this Barnawi-led group does not indiscriminately stage attacks on civilians but only levies them.

“Jama’atu Ansarul-Muslimiina Fii Bilaadis-Sudaan”, aka “JAMBS”, meaning “Vanguards for the Protection of Muslims in the Lands Of the Sudan/Black Africa”, the faction of Abu Usamah Al-Ansori/Muhammad Haruna Bello.

At this point it is quite disturbing to see the false and rather meaningless information being spewed by the man who is in charge of military and civilian lives in Nigeria.

Continuing to defend the initial false news of a defeat of Boko Haram, by claiming that the defeated terrorists simply rebrand and become armed and capable again is an insult at Nigeria's collective intelligence and a latest blatant adventure into politics by the Nigerian military which should be professional and apolitical.

Boko Haram is not defeated and never was. Boko Haram affiliated with ISIS and got nicknamed “ISWAP” since Abubakar Shekau made a pledge in March of 2015 under the then Jonathan government, before Buhari took over and while Buratai was into army procurement business and purchasing his properties in Dubai and not yet army chief. The affiliation was meant to be deadly, not the name. They did not rebrand, they simply became affiliated with ISIS.

And at this point, let us even look at ISIS or “IS” from where the “IS” in “ISWAP” comes. ISIS is not even the name of the terror organisation in the Levant. It's real adopted name is “ad-Dawlah al-Islāmiyah fī 'l-ʿIrāq wa-sh-Shām”. ISIS and ISIL are interpretative monikers given by intelligent organisations.

The name conscientious IS-detractor Arabs gave ISIS was “Daesh,” which is an insult and can mean felon or dust. Thus smart Arabs gave the group a debasing name to help decrease its popularity. This is the opposite of what the Nigerian military is doing by seeking the use of names to increase the group's reputation.

It is time for Buratai to retire or be retired.
It is past time for a total overhaul of all Nigeria's service chiefs.

The presidency should think first about protecting Nigerian lives and not their personal political security.

We can no longer tolerate what can only be described a Tramadolized security setup.

When will the NASS ask Buhari to sack his wife?

Little Mistakes Lawyers Make in Courts and How to Avoid Them

82 thoughts on “Buratai's Obsession With Branding: The New Dangerous Fake News From the CoAS”