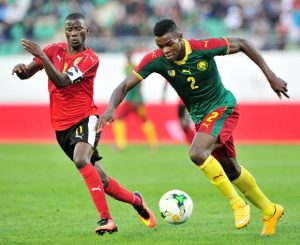 Burkina Faso and Cameroon played out a 1-1 draw on Wednesday night in their final Group D match to see both teams exit the 2018 African Nations Championship (CHAN).

While the Indomitable Lions had already been mathematically eliminated prior to the match, the Stallions still had a slight chance of advancing into the quarterfinals, but their failure to claim a win in Tangier has seen them finish in third behind Congo and Angola.

The teams very much cancelled each other out in the opening half, with neither really able to assert any kind of dominance. Both Burkina Faso and Cameroon created half-chances from set pieces, though neither goalkeeper was particularly troubled in the first 40 minutes.

That all changed in the 42nd minute when the Stallions claimed the lead. Winger Wend-Panga Bambara stormed down the right and played in a hopeful low cross which was fumbled by goalkeeper Anye Fru, allowing Mohamed Sydney Sylla to put the ball home from close range.

The Indomitable Lions hit back eight minutes into the second half, with Willy Namedji sending Bille Ngoundo free down the right, who in turn provided a perfect cross to find the unmarked Patrick Moukoko at the back post a�� the striker easily turned the ball home to make it 1-1.

Moukoko nearly put Cameroon in the lead on 63 minutes, as his shot from an acute angle flashed just wide of goalkeeper Adama Sawadogo’s left-hand post, while in the 77th minute the Burkinabe had strong appeals for a penalty turned down by referee Victor Gomes, with defender Paul Otia lucky to get away with hand-ball in the box.

Wenger, Arsenal come under fire after crashing out of FA Cup