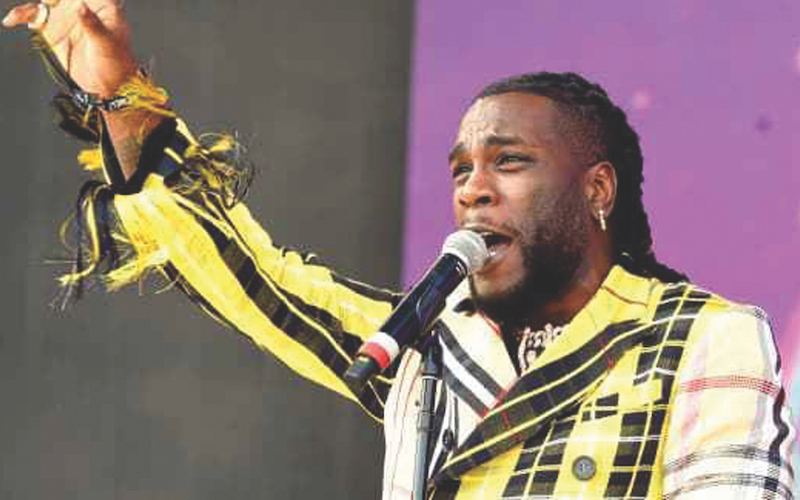 Damini Ogulu a.k.a. Burna Boy came into national reckoning in 2011 with the release of hit single ‘Shobeedo’. He was barely nineteen at the time. Some of his critics who weren’t comfortable with his style of music made a ‘prediction’ that he would fizzle out sooner than later. They attributed the hit single to be a mere flash in the pan.

How wrong were they! Year after Year since 2011, he has released both hit singles as well as albums confounding the harshest of his critics and making them eat their words.

When he received the BET awards this year in the United States, his mother, Bose Ogulu who once acted as his manager gave a very moving speech on his behalf which went viral.

Like most artistes, he has had his fair share of controversies. He allegedly stabbed someone to death in London for which he was allegedly tried and jailed as a minor. He was released after eleven months for a two months parole where he should have done some community service for exhibiting good behaviour while behind bars. He was said to flown back to Nigeria and thereby flouting his bail terms. He has consistently denied the homicide charge and it remains for the London Metropolitan Police to confirm or deny this weighty allegation.

In 2015, he had a public fight with Zimbabwean dancehall star, Buffalo Souljah in a party in South Africa. He also posted two pictures of him with a gun on Instagram. He had a skirmish with a man in Lekki that same year which led to the unnamed man being severely beaten up by the artiste’s bodyguards.

“These bloggers be writing shit thinking it’s a game until I see yall face to face one-day nd hospitalize or murk u. We gon meet 1day #onsight” he infamously tweeted.

He is a huge export abroad as his concerts are usually sold out. In a recent concert in England which held in the Wembley area, the show was so sold out that the influential Guardian UK proclaimed him as the ‘King of Afrobeats’.

Art critics were aghast at the comparison between him and obviously the Abami Eda himself, Fela Anikulapo-Kuti. The newspaper portrayed him as the successor to the late Afrobeats maestro. They were angry at the ridiculous five star rating given to it by the paper.

While I agree that Burna Boy is a commercial success, it is wrong to declare him as the King of Afrobeats. Fela’s songs have stood the time. His songs are still being played with succinct messages being passed across through it over twenty-two years after his earthly transition. His music was prophetic and the predictions he made true before our very eyes. Let’s be critical here: what particular message does Burna Boy pass with his music? His target audience and market is the Nigerian youth who only appreciate dancehall music that can be played in clubs and at parties. Would we still remember his songs twenty, thirty years from now?

The music scene in Nigeria is really facing a hard time as our artistes are not interested in making classical music like their forebears did. They just to release a song or album and ‘blow’. They are motivated by the fast lane life – sports cars, mansions, a bevy of beautiful ladies amidst other mundane things. The immortality of their music takes a distant back seat as they are happy to spew out lewd and crude lyrics in their bid to keep up with the Joneses.

Fela sang a song ‘kolo mentality’ where he boldly and roundly denounced the African that had refused to stop looking for ways to please the Whiteman at the expense of himself. ‘They don release you but you never release yourself’ were the words that aptly depicted this behaviour.

Africans should be the ones to judge their music and give titles rather than the condescending west who always want to raise local clones. This imperialist stance must stop if the continent is to rapidly develop.

They give us names like ‘Netflix of Africa’ used to describe Iroko TV amongst other hilarious appellations.

Egypt in Africa is regarded as the world’s cradle of civilization; King Mansa Musa of Mali is rated as the wealthiest man in history second only to perhaps King Solomon who incidentally was an Asian.

It is high time Africans took the issue of their identity more seriously. We should celebrate our own and not outsource our thinking caps to the west that have nothing for contempt for us. For how long will this continue?

I expected the fans and family of Fela to roundly criticize this questionable endorsement of Burna Boy. What do we get? A loud, conspiratorial silence. Such is life! Life continues ad infinitum since dead men don’t talk.

ACTION BEGINS IN THE NEW WAR AGAINST PIRACY AS INTERFACE COMMITTEE MEETS IN ABUJA.

47 thoughts on “Burna Boy: All hail the new ‘Afrobeat’ King?”