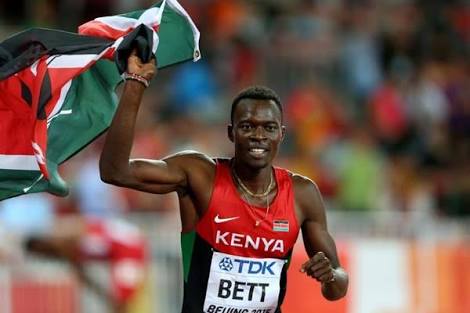 Two days after the Africa Senior Athletics Championship Competition ended Sunday at the Stephen Keshi Stadium in Asaba, Delta State, one of Kenyan athletes, Nicholas Kiplagat Bett, has passed on Wednesday after leaving Asaba on Tuesday.

Bett passed away on Wednesday morning , a day after returning from Asaba, where he and his colleagues did Kenya proud to emerge as the overall champions at the continent’s flagship athletics event; a feat the East African country last achieved over three decades ago.

The 28-year-old former world champion was the first Kenyan ever to win a World’s gold in hurdles after his magnificent run in Beijing 2015 Championships, died on the spot after the car he was driving veered off the road and landed in a ditch near Lessos along Eldoret-Kapsabet road on Wednesday morning .

Meanwhile, the Local Organizing Committee, LOC for the recently concluded 21st African Senior Athletics Championships, have expressed deep shock at the news of the sudden death of Kenyan athlete, Bett.

In a statement issued by Olukayode Thomas, Head Media and Publicity for Asaba 2018, the LOC Chairman, Solomon Ogba said the sudden demise of Bett was a big blow not just to Kenya but to the rest of Africa.

“We were deeply touched when we heard the news of Bett’s death on Wednesday. “Coming at a time when the athletics family in Kenya is still celebrating their heroic performance in Asaba, it is painful that the former world champion is no longer around to savour this magic moment with the rest of his colleagues.” The LOC boss added.

While Ogba is condoling with the athletics family in Africa, he advised that the legacies of Bett must be sustained and the former world champion must be immortalized.

“He was a great son of Kenya and Africa, so I expect that his legacies must be well protected, I pray for his family and his loved ones to have the strength to bear this irreparable loss” Ogba concluded.

Nigerian Appeal Court President Must Disqualify Herself As The Appointer, Presiding Judge, Regulator And Determiner Of The Presidential Poll Tribunal & Its Expected Outcome