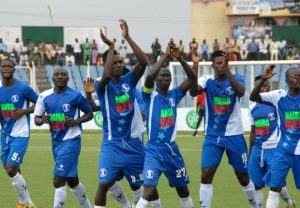 The four Nigerian sides avoided being pitched against each other as the draw of the second 1/16th round of the 2018 CAF Confederation Cup was conducted on Wednesday in Cairo, Egypt.

The development means the four clubsides can reach the group phase of the competition if they overcome their opponents over two legs in April.

Both Enyimba and Akwa United, who were originally Nigeria’s representatives in the competition, had advanced into the round after succeeding in the first 1/16th round.

They were joined by the duo of Plateau United FC of Jos and MFM FC of Lagos who dropped into the competition after failing to advance in the CAF Champions League.

NAN reports that both Plateau United and MFM FC had campaigned initially in the CAF Champions League.

The four Nigerian sides had then faced the possibility of facing each other if drawn together, though this is still a possibility in the next round.

Now, Plateau United and Akwa United seem to have the toughest part of the draw, having to face North African sides in USM Alger and Sudanese giants El Hilal respectively.

They had faced North African foes in the last round of the CAF Champions League and CAF Confederation Cup respectively.

Plateau United had lost to Etoile du Sahel of Tunisia 3-4 aggregate, while Akwa United beat Al Ittihad of Libya 3-2 on penalty kicks after a 1-1 aggregate draw.

Enyimba and MFM who lost 2-7 aggregate to MC Alger of Algeria should face no hitches in overcoming their opponents, judging by the clubs’ pedigree and recent performances.

First leg matches in the second 1/16th round will take place between April 6 and April 8, while second leg matches are for April 17 and April 18.