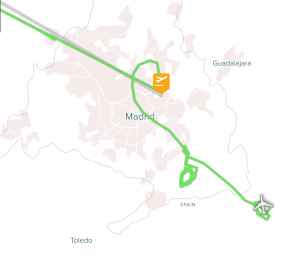 An Air Canada Boeing 767 aircraft has made a safe emergency landing at Madrid airport after part of the jets landing gear reportedly fell off and entered its engines.

The Toronto-bound flight AC837 touched down shortly after 7.10pm on Monday.

Fire engines immediately appeared alongside the aircraft but no flames were apparent.

One passenger tweeted a video of the moment the plane landed after a reported three hours circling the city to burn off fuel.

he flight departed from the Adolfo Suarez-Barajas international airport earlier in the day.

Spain’s main union of pilot workers, Sepla, said in a tweet the plane lost some pieces of its landing gear during takeoff and the aircraft needs to fly in circles to burn off fuel before landing.

Citing airport sources, Spain’s El Mundo newspaper reported that the plane is carrying 130 passengers and that it lost a wheel during takeoff.

Sepla said the plane would have to burn for fuel for three hours before landing.

The Canadian airliner called air traffic control 30 minutes after takeoff and requested a slot for an emergency landing, an AENA spokeswoman said.

She was unable to provide further details or say whether the incident was in any way related to the previous shutdown.

According to Flightradar24, a tracking website, the aircraft involved, a Boeing 7367-200ER, is about 30 years old.

jThe incident occurred just hours after a drone sighting near the takeoff area at the airport caused a brief disruption, with 26 flights diverted away from Barajas.

The Transport Ministry announced the closure of the airspace around the Adolfo Suarez-Barajas airport in Madrid after Enaire, Spain’s air navigation authority, reported the possible presence of drones in the area.

Spain’s Civil Guard said an investigation had been opened after two pilots had reported seeing some drones near the airport, which is located just east of the city centre.

Enaire, which activated a special procedure to halt landings and takeoffs and divert flights to other airports, warned in a tweet: “A drone is not a toy, it’s an aircraft.”

With an average of 1,200 flights per day, the Adolfo Suarez-Barajas international airport in north-eastern Madrid is the one with the most traffic in Spain and one of the busiest in Europe.

At the end of 2018, more than 140,000 travellers were stranded or delayed after dozens of drone sightings shut down London’s Gatwick Airport, Britain’s second busiest, for parts of three consecutive days.