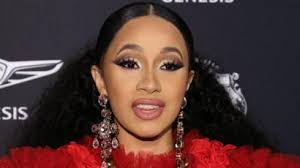 On January 3, 2020, the United States Government took responsibility for the murder of Iranian General Qasem Soleimani who they claimed was planning to attack American diplomats in the Asian country. There were mixed reactions over the attack. Some hailed the move as a bold step in the fight against terrorism while others condemned the attack as being capable of sparking a third world war.

American songwriter and rapper, Cardi B was among the latter as she sturdily criticized the move on her verified twitter handle. Her tweet read ‘“Specially being from New York. It’s sad this man (Trump) is putting Americans’ lives in danger. Dumbest move Trump did till date (sic) … I’m filing for my Nigerian citizenship.”

“Picking my tribe,” she added after about an hour later.

This is rather interesting in view of her recent visit to Nigeria where she was well received by both her fans and followers of the entertainment industry. Her die hard fans danced heartily to her music and she obviously smiled home to the bank – the case of the rich getting richer. She must have fallen greatly in love with the country for her to consider her worthy of her citizenship.

Her recent decision caught the attention of the Special Adviser to the President on Diaspora matters, Abike Dabiri-Erewa who was quoted to have said: “As one in charge of the Diaspora for Nigeria, We can’t wait to receive you again. Our doors are open, sister.

“And you need to take a walk through the Door of Return in Badagry . It’s an indescribable experience.”

Popular Nigerian musician, Naira Marley was also supportive as expressed in his tweet ‘Send me ur full name and dob https://twitter.com/iamcardib/status/1213169715759026176 …

How exactly does she intend to achieve this? Does she want a dual citizenship as is common with many people or does she want to totally renounce her American citizenship as she claims the world’s number one nation cannot guarantee her safety. Does she also intend to permanently take up physical residence in the nation which Donald Trump described as a shit hole? A nation where a substantial majority of the citizens are doing all they can to relocate including the elderly as the socio-economic fortunes continue to worsen on a daily basis? Can she cope with the lack of electricity and basic amenities as well as the noisy generators that make the whole country one hell of a mad house? Will she stand the risk of being kidnapped and held for ransom? Will she convince her husband to also relocate with her and sell their recently purchased $6 million mansion to take the next flight to the ‘Giant of Africa?’ What will happen to her music career? Will she have a large enough fan base here to guarantee her numerous endorsements from the big brands? Will she get an artiste manager here to manage her? Will she be as popular and street credible as the likes of Tiwa Savage, Teni, Yemi Alade who has the distinction of being the most viewed African female artiste on Youtube? The hustle is real as they say in Nigerian parlance; will she find it that easy to be accepted by the locals who may not fully understand what she raps about with her ‘phonetics?’

In my honest opinion, I think she was just trying hard to trend on social media as she doesn’t have the intentions on following through her newly found desire. As the old cliché goes ‘It’s easier said than done.’ The star rapper just wanted to get emotional and cash in on the growing disaffection with Trump.

Never say never as the saying goes. You never know with these foreigners of their attraction to this country so hated by majority of its citizens. The year is still new and let’s see if she will really pursue this newly discovered desire.

Port Harcourt: From Cultism to Flood.